I was in the Côte d’Or (and, indeed, the Côte Chalonnaise) in November for a few days sampling the 2017 vintage. And I have to say it was something of a pleasure, for we (tasting buddy and I) found happy wines and happy wine makers.

Following years of one natural disaster after another – frost and hail and rot in seeming rotation - 2017 is a return to relative normality in terms of yield. Quantities are really rather good…but what about quality?

There’s that mantra I regularly trot out that wines should be beautiful things, especially burgundy and with these 2017s I am not disappointed. Those craving thick, dense, high alcohol wines had better look elsewhere this vintage, since what we have are wines of remarkable style, panache, transparency and mineral expression (by this last I mean that they taste of their distinct vineyards, having terroir in spades). They are the antithesis of “blockbuster”, singing like a solo choirboy at King’s College, Cambridge with nape-tingling purity and exactitude.

These are wines that were easy to taste, will be approachable relatively early, but which have the wherewithal to age with grace. Above all, they are extremely beautiful things, red and white. I wholeheartedly recommend them to you.

The Domaines & Their Wines

You can read about the domaines and their wines either by scrolling through all of them or, if you are interested in a specific domaine, by clicking on a name in the list below to jump straight to that domaine. Each wine name is a live link to the wine in our online shop, and all 2017 wines from any one producer are linked within the shop. The photographs and domaine titles are live links to ALL 2017 wines from that domaine. 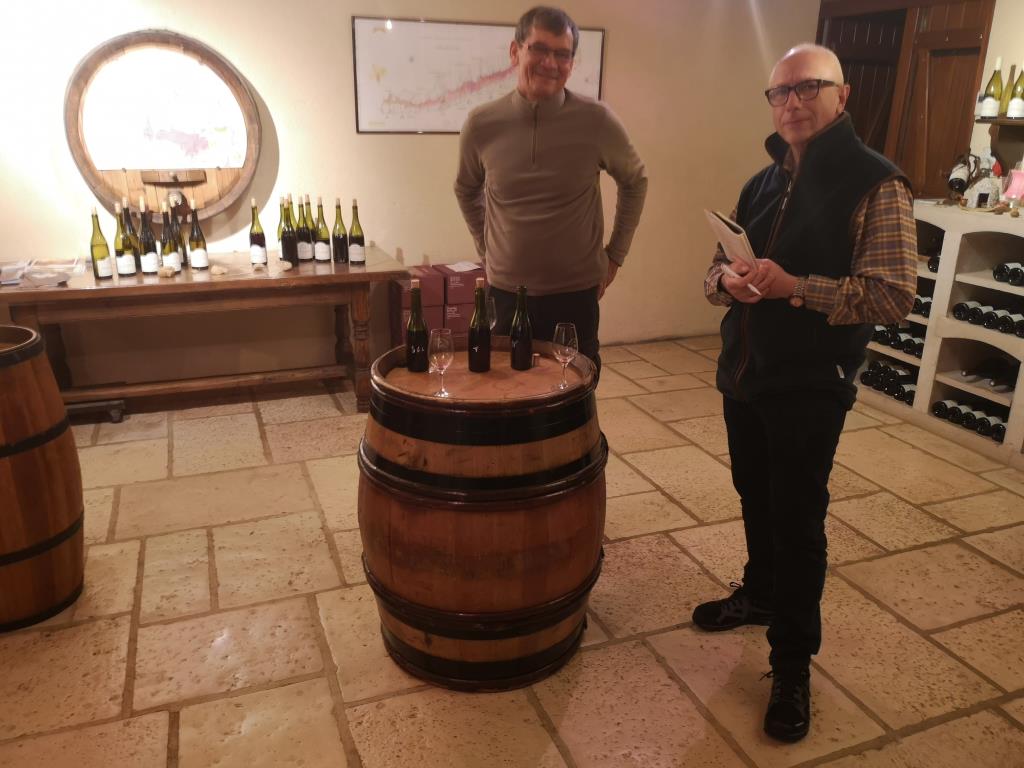 Rollin Père is Rémi, who has spectacularly held the reins at this 14 hectare domaine since the torrid vintage of 1976. He is now joined by his son Simon and together they craft some of the finest value wines in all Burgundy.

As with Savigny-lès-Beaune, so is Pernand-Vergelesses overlooked because it is slightly off the beaten track…and perhaps because its name is tricky to the uninitiated. Yet the Rollin wines could hold their own in whatever burgundy comparison you’d care to name.

The white village Pernand is a stunner and capable to withstanding 6 to 10 years in the cellar in most vintages. And their Corton Charlemagne is one of the finest wines of the appellation. 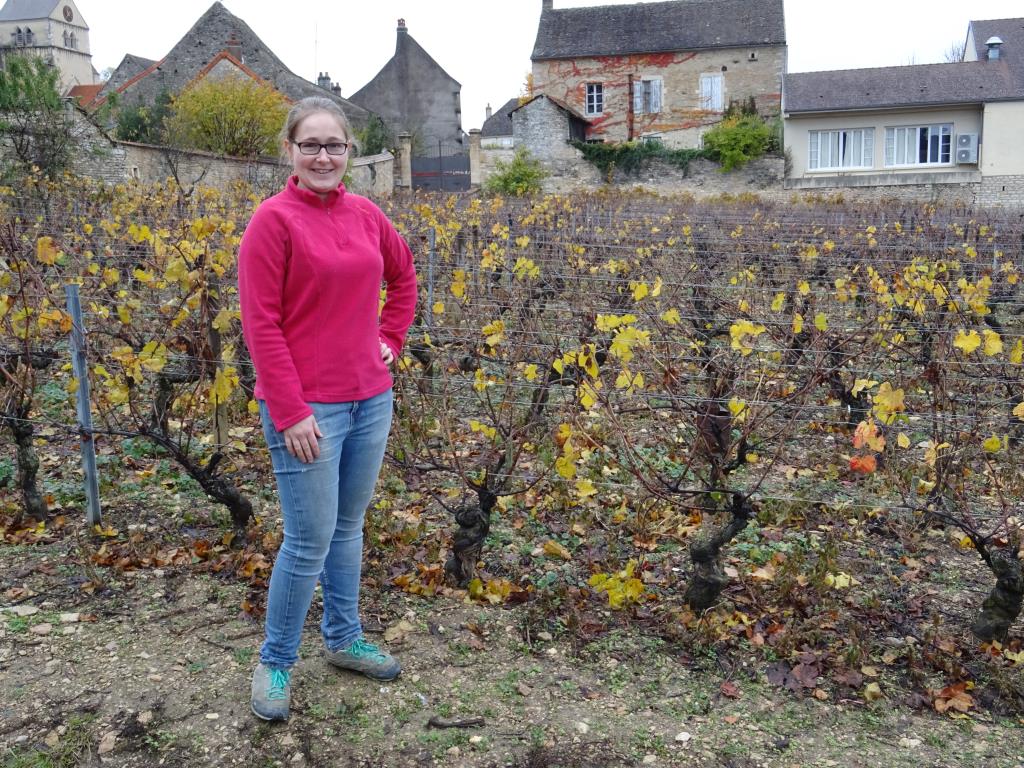 The wines at this great Volnay estate are now made by Frédéric Lafarge, Michel's son. The domaine works around 10 hectares of vines biodynamically and produces among the finest wines in the Côte de Beaune.

The cellars here are low-ceilinged, cobwebbed and there's very little evidence of new barrels (very few are employed). Yet the wines emanating from the old wood casks are as beautiful an expression of their individual grape varieties and terroirs as one could hope to encounter.

After we’d tasted the ‘17s, Frédéric’s daughter Clothilde took us through a door to show us the Clos du Château des Ducs premier cru vineyard which lies right next to the winery. Among the rows of vines, chickens were scratching for buggy food: a reminder that this estate has been certified biodynamic since 2000. 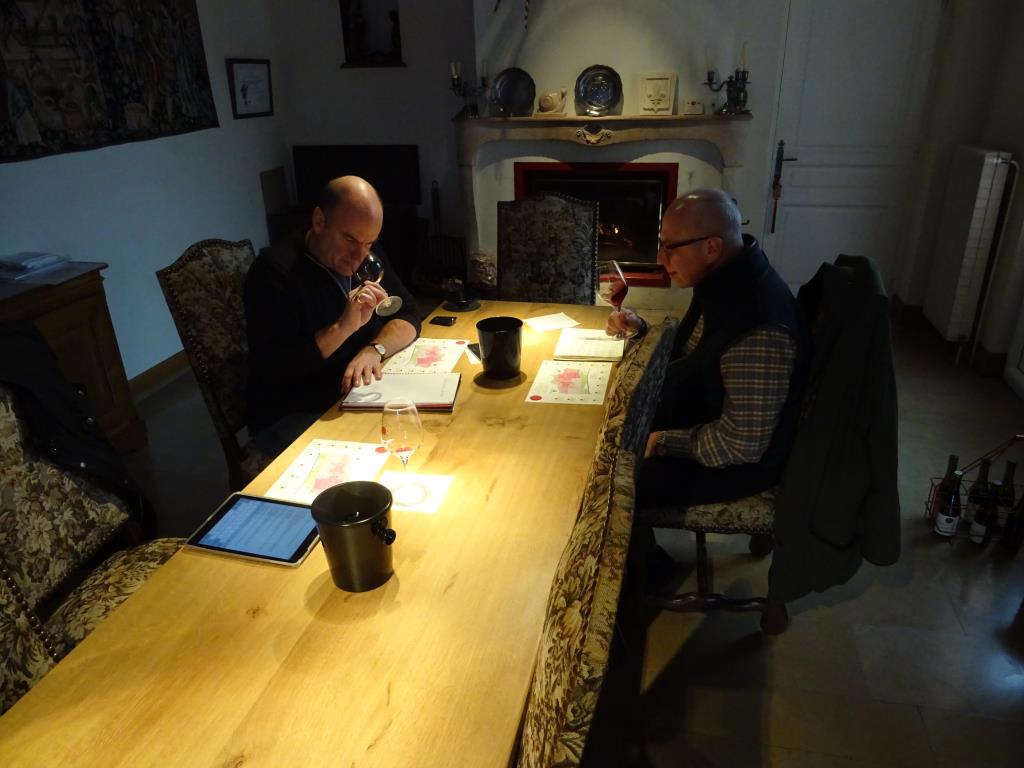 This domaine has its roots at the start of the 20th century when Henri Lamarche, a cooper, married Marie Grivelet from Chambolle-Musigny. Henri started making his own wines and selling them directly from the estate. It was his son who gained the La Grande Rue vineyard from his wife's family by way of a dowry. This was in the 1930s when there wasn't great demand for burgundy and grands crus attracted more tax, so M Lamarche decided to leave the vineyard as a premier cru (this is despite its location between La Tâche and Romanée-Conti).

In 1989 La Grande Rue was elevated to grand cru status by the INAO. Lamarche bottles 14 different wines from a little more than 10 hectares of vineyards. Nicole Lamarche now makes the wines and the quality is really very good indeed. 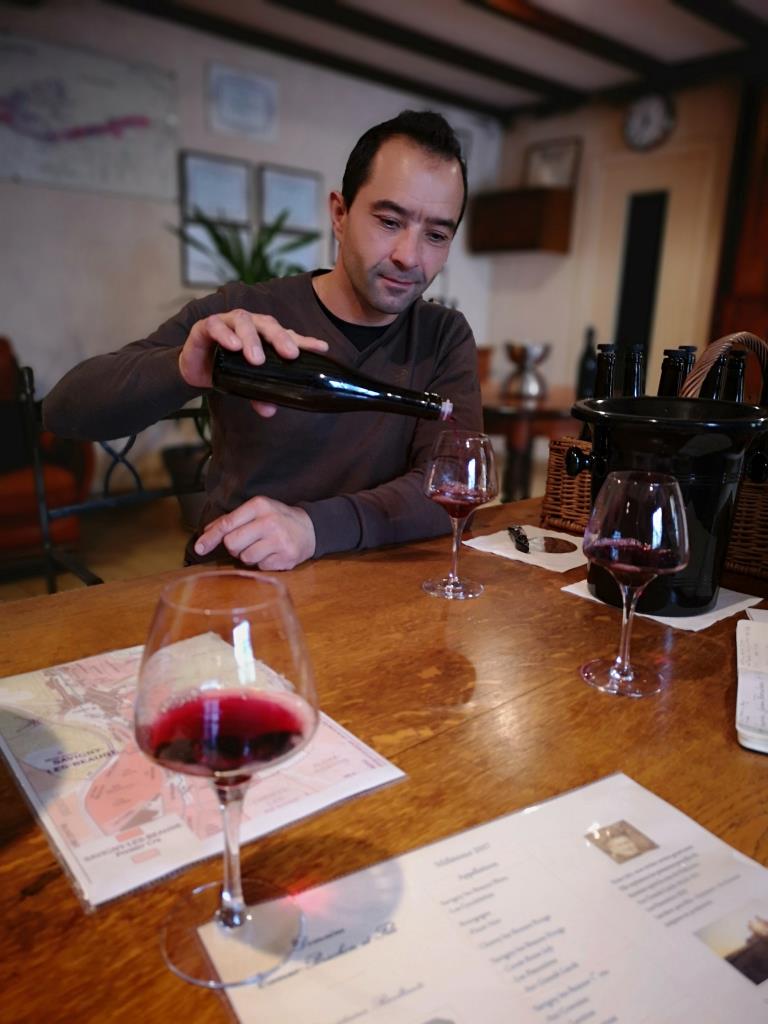 This domaine has its origins in the early 18th century, but was most recently run (until his death in 2017) by the charming Luc Camus. Luc's own father died when Luc was only 12 in 1961 and Luc took the reins of the domaine in 1972.

This is a winery that, in a more celebrated commune, would rightly be very famous. It is just that their home commune of Savigny is so overlooked: shame, as it is to where the cognoscenti go for a proper bargain.

Camus-Bruchon is now run by Guillaume, Luc's son, who works c. 8 hectares of vines in Savigny, Beaune, Chorey and Pommard. The Savignys, from exceptionally old vines, are some of the finest wines of the appellation. 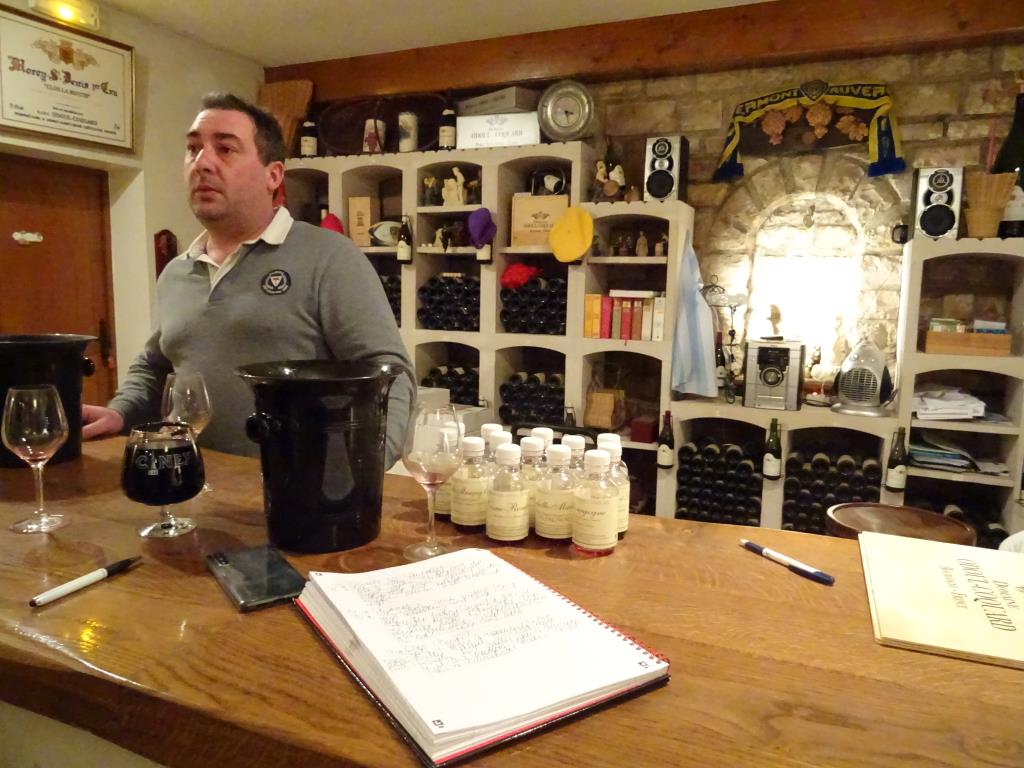 Sébastien Odoul and his tasting samples at Domaine Odoul Coquard

Sébastien Odoul is the fourth generation to make wine at this domaine, situated in Morey-St-Denis. They make 20 different appellations from their vineyards of almost 10 hectares. They were listed by Bill Nanson as one of his 10 new domaines to watch. 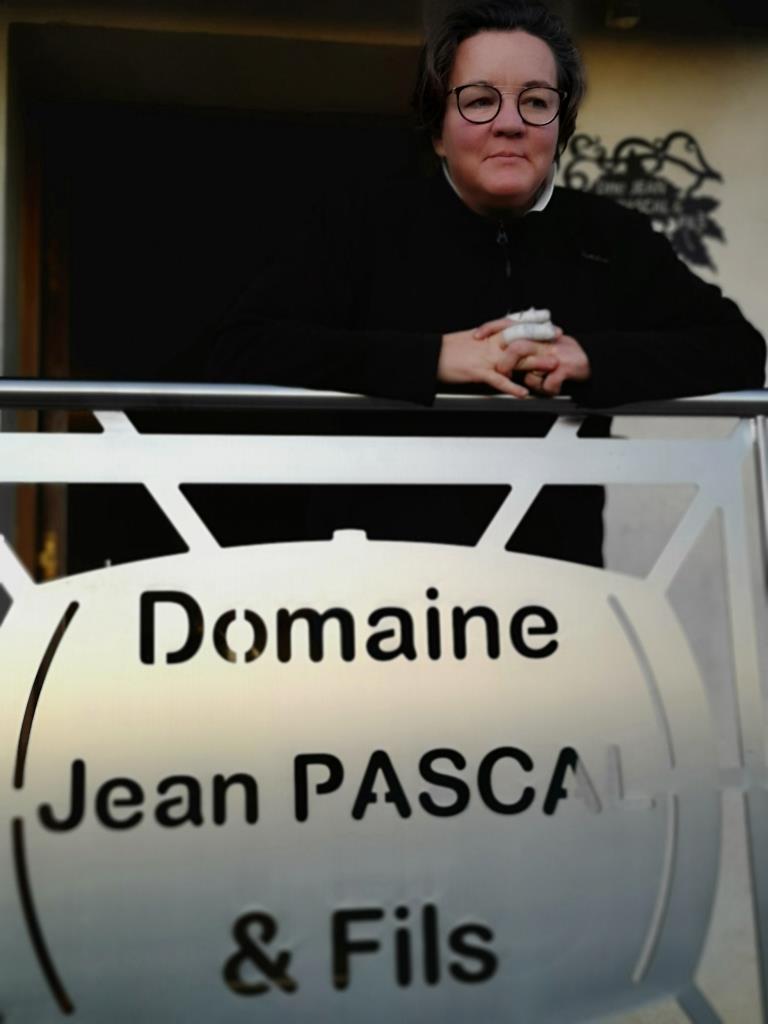 The first Pascal arrived in Puligny in the early 20th century, marrying a local girl and working on the land. They had two sons and acquired some vineyards locally. During a lull of interest in burgundy sales they moved into vine production. Throughout the 1970s the domaine expanded to 15 hectares spread over four communes: Meursault; Puligny; Volnay, and Auxey. Today, Yann Pascal looks after the vineyards, whilst his wife Alexandra makes the wine and is responsible for sales. 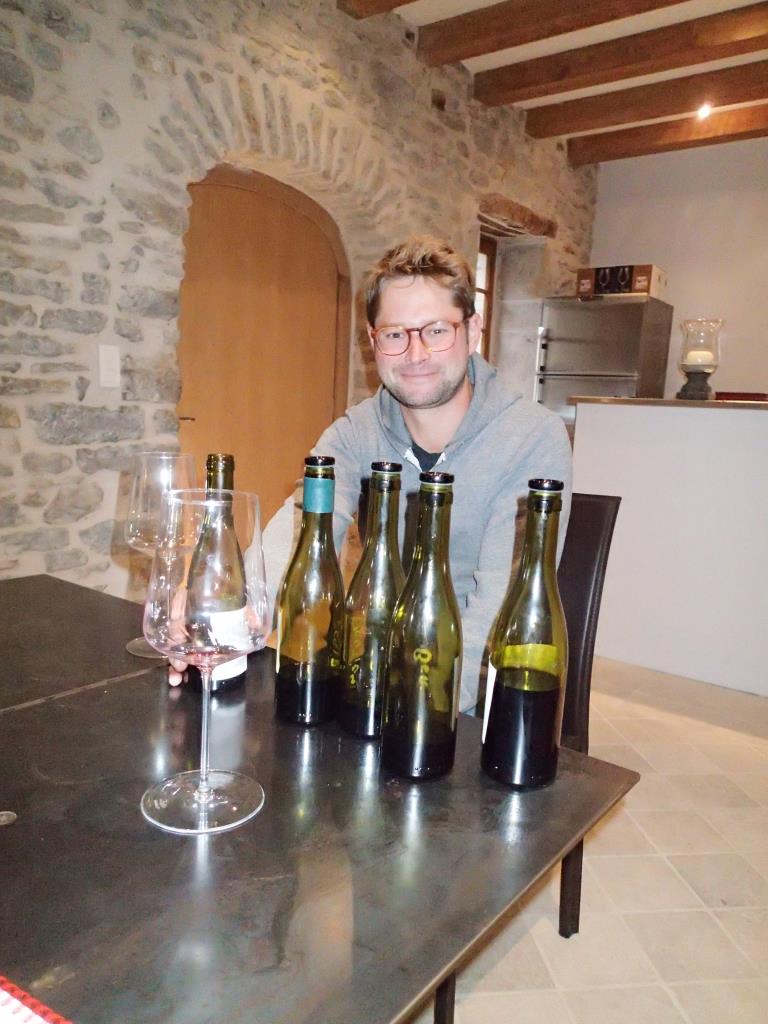 Marc and Alex Bachelet have rapidly taken their 10 hectare domaine to the top of the Burgundy hierarchy. They work their vineyards naturally, eschewing herbicides. And they practice pre-ox for their whites, a technique whereby the pressed juice is allowed to oxidise before fermentation, stabilising the finished wine and obviating the risk of prem-ox i.e. the wine ageing prematurely. A domaine renowned for their electric white wines, do not ignore their reds, which are utterly delicious too. The domaine headquarters are in the delightfully-named Dézize-lès-Maranges, in the very south of the Côte de Beaune.