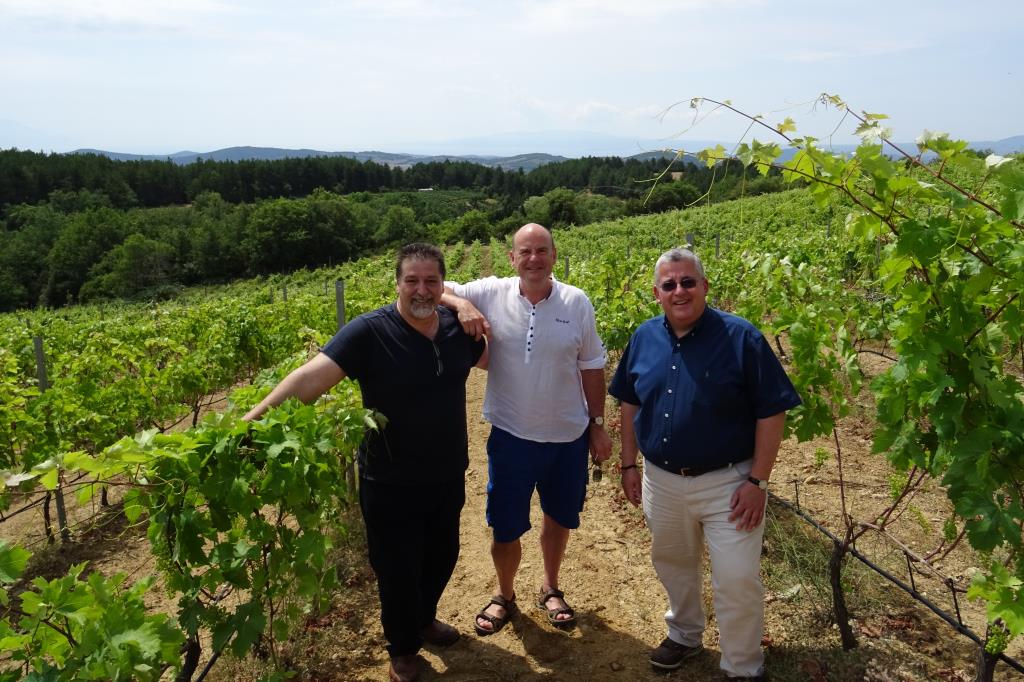 Estate manager and part-owner Babis Bekris, Caspar Bowes and one of the other part-owners Mark Rachovides

Greece is among the most venerable of wine producing countries and, indeed, Greeks were responsible for introducing wine growing to both France and Italy.

The vinous Greek renaissance has been underway for many years now, the wine press having been waxing lyrically about bottles from one or other part of that country since the mid-1990s. With advances in wine-making and –growing techniques and a catalogue of fascinating and high quality autochthonous grape varieties, I am no longer remotely surprised to find a new Greek wine that rocks me backwards with its salient qualities.

One such wine that has done that of late is especially close to our hearts, since it is the outpouring of a vineyard part-owned by a long-standing Bowes Wine client.

Last year I flew to Thessalonica with  Mark Rachovides, owner of Akrathos Newlands Winery, and after a half day exploring that captivating city, we drove to Halkidiki to visit the vineyard and winery.

The day was hazy, but even so, one could just make out the imposing cone of Mount Athos in the distance. From these high slopes (we’re at 600 metres or so above sea level here) one looks over brown soils down to the sea far below, the earth glinting in the sunlight from all the mineral wealth that it holds. Here are planted two of Greece’s finest grapes: Assyrtiko and Xinomavro, white and red respectively, plus another Greek classic, Agiorgitiko (also known as St George, rather like a Greek Merlot).

That Assyrtiko is one of the world’s most extraordinarily communicative grapes is not in question. From its home in Santorini emanate wines into which has been deeply dialled the wild volcanic austerity of that island.

Here in Halkidiki it speaks no less clearly. This is the last Assyrtiko vineyard in Greece to be picked due to its altitude. And it gives a wine of almost Riesling-like cut and precision. It tastes very much like Assyrtiko, but drinking it one is quite certain that one also tastes Halkidiki exceptionally clearly.

2016 Assyrtiko, Akrathos won a friend in Jancis Robinson who listed it in the Financial Times as one of her 32 dry whites for Christmas drinking. She noted:

“Debut vintage of this high-elevation wine. Extremely accomplished, satisfying and well balanced. Good core of fruit and crystalline structure. This would be a delightful aperitif but has quite enough extract to be served with food - oily fish? -  too. Really very delicious. Perhaps a little more mid palate weight than the average Santorini Assyrtiko?”

Joanna Simon also selected it in her Festive White Wine Guide in 2018.

The red wines: Xinomavro and Philosopher

The estate also produces two red wines, the debut vintages of which we are offering:

And all wines were given the ultimate stamp of approval and selected by the Head Sommelier, Ronan Sayburn, for the list at 67 Pall Mall (the new private members' London wine club).

The Assyrtiko is truly stunning and the best bottles of these reds are extremely good. However, we have found some bottle variation in the reds (NOT the white) in this debut vintage as they were not all bottled at the estate.

We are therefore offering an introductory mixed case with a significant discount to introduce our clients to the three debut wines from this exciting new estate:

Price includes duty and VAT. Standard delivery charge applies. You can place our order via the website or email customerservices@boweswine.co.uk.