Blofeld menacingly stroking his white Persian. It’s an image that floats into one’s mind as one drives up what passes for little more than what the Italians call a strada bianca and the Aalto winery comes into view.

Incongruously, it appears to float over the barren surrounding landscape and it offers the visitor a tour of its interior every bit as modern as one would expect from one’s first impression.

Mariano Garcia is one of Spain’s most respected wine makers. Born to vineyard workers at Vega Sicilia (a location more a self-sufficient hamlet than a simple winery), Mariano worked his way up to the role of technical director, a job he enjoyed for thirty vintages.

He created the Alion label for the estate: a more affordable wine from this, perhaps Spain’s most prestigious winery. Recognising the potential of the nearby Toro region, one of his last acts at Vega Sicilia was to create Pintia, a wine that has come to define that region. 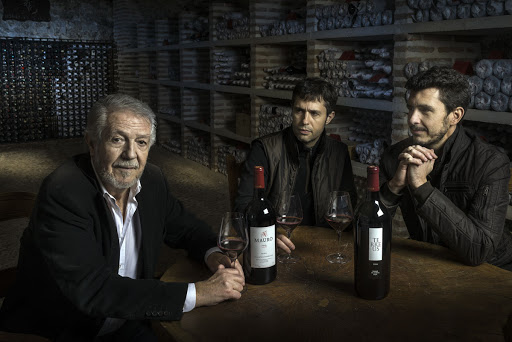 Mariano Garcia and his sons Eduardo and Alberto

Mariano founded Aalto with his friend Javier Zaccagnini in 1999 and the perceived conflict of interests resulted in him severing ties with his erstwhile employer.

The design of Aalto - named for Mariano’s favourite architect – gave utter consideration to the gentle handling of fruit and wine. Fruit arrives on the roof of the winery and descends floor-by-floor via gravity through the wine making process, finally leaving as bottled wine at ground level.

We have secured a small parcel of the below wine which, of course, comes highly recommended.

"The 2017 Aalto was a surprise for the vintage. They had to select the grapes from their own vineyards, and they produced less wine. It feels a little lighter and fresher, more approachable at this point in time. The oak also seems to be more integrated. It's a very drinkable Aalto in its style. They only used some 20% new oak and possibly did a softer vinification. It's approachable now, but it should also develop nicely in bottle, as the year had more acidity. 94/100." Luis Gutierrez