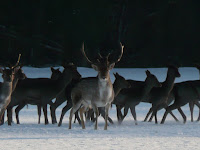 Fallow deer in the snow during a recent shoot


I do sometimes wonder whether we will go down in some or other annals as the generation that dumbed wine down. In my opinion, the greatest single thing that will lead to us being recorded as such is the practice of scoring the stuff.

The problem with scoring wine is that it is something that professionals do; it is result of technical evaluation, yet such are its faults that I really believe that we are deceiving ourselves as well as the consumer about wine scoring's significance.

The major problem with scoring wines is that it is an entirely incomplete way to grade a wine. Where, for example, does the score tell you how much one will enjoy the wine being assessed? Perhaps it is a little low in acidity, a little too strong in tannin. Yet it could still enchant the drinker, perfectly accompany the food with which one drinks it.

And what if that Savigny has a little too much brett, or is a little over-ripe? In the consumer's minds, a score of 86 puts it in the league of the nigh-on undrinkable.

I would postulate that wine scores are a lie; propagate the lie that there is perfection in wine, and imperfection in any wine that is not technically perfect.

We have ourselves to blame that the consumer ignores "lesser" vintages and producers. After all, the professional wine journalist/writer has tasted them and found them to be wanting. No wonder we who sell wine for a living find it hard to sell 2001, 2004, 2007 (and I suspect 2008) burgundy and similarly under-praised Bordeaux vintages.