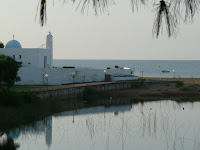 A Greek chapel, a pond full of frogs - cacophonous at night - and the Med beyond


Back, finally, we are from our Grecian holiday and I must say that, four days after returning home, the general feeling of well being/relaxedness/regeneration is still tangibly present. (I should, of course, quantify this statement in case anyone reading this blog falls into the "would like to meet…", or "love to have children some day, with the right person, only when we're both ready etc." brigade. I am - we are - parents. Relaxedness resulting from a two week holiday in the sun takes the form of, for example, allowing one's 21 month old daughter to felt tip abstract designs on her bare stomach for a full 25 seconds before expressing one's displeasure. Like I say…fully relaxed.

Greece is a great country and one in a terrible state. Its economic woes, I would add, were entirely invisible shielded, as we were, in our Mark Warner resort. Those of you who are wondering who this Mark Warner chap is are, I would guess, expats from a young age, childless, or suffering from the sort of photosensitive skin condition that requires you to stay away not just from Mediterranean resorts, but brochures advertising such. In short, Mark Warner is a brilliantly conceived concept that offers a broadly reasonably well-heeled client base the opportunity to travel by very basic charter flight at an extremely anti-social time of the morning to a sun-drenched location where one and one's family get to stay in a hotel/villa that is, objectively, no more than 2 star in the global scale of such things, eat extraordinarily abstract food that, yes, occasionally, has dire effect on one's digestive tract and yet be insanely happy because well-trained and rather sweet English girls take one's children away and play with them for hours on end, thereby allowing one and one's spouse to remember and re-enact distant times when one was human and not simply a parenting machine, ever tired, mostly grumpy and apparently directionless. Like I say, great concept. Should be making masses of money, but not sure they are. If one remembers that gut-wrenching affair of some years ago, Maddie McCann's disappearance was from a Mark Warner resort and mud, as they say, sticks.

Anyway, V put the case for a single week's holiday. I countered and with conviction. I've done the week before and they had to not only sedate me but break most of my fingers to get me out of the resort and onto the 'plane for the journey home. Problem I find is that it takes me three days to start to unwind and on day four mild depression sets in at the thought that most of the holiday is behind me. No, it's two weeks or nothing. After two weeks one is looking forward to going home and how better to end a vacation? (Incidentally, the only place I have ever visited where, after two weeks, I have really not wanted to leave was Cuba. And if you've never been, I suggest you go now before Macdonalds arrives, along with crime and Twinkies.)

I enjoy the Mediterranean lifestyle. It isn't for me, I will add. I have no craving to move to California. I distrust and misunderstand those who move to LA and harp on about blue-sky mornings, continual positive life attitude yadda-yadda. Most of them end up vegan. Tragic.

But for two weeks, I revel in it. 39 degrees of dry heat in the shade. Even the sea appears lazy, twice a day minutely shrugging its watery shoulders into a half-hearted approximation of a tide, as if it, too, is chanting some mantra: "mañana; mañana".

The second week of our holiday was much cooler. Hotter, we heard, in the UK. Someone said, well they don't have this childcare in the UK, combined with this sailing, these swimming pools, this devil-may-care atmos. How right.

Now we're back. Work is brisk. I am selling all the hundreds of cases of 2009 Bordeaux I bought poolside when away (and I am sure some of our fellow vacationers looked at me with contempt, perhaps pity, as I feverishly tapped into my Blackberry on my lounger. They probably thought I was some financial trader dumping toxic debt. I didn't feel the need to explain).

It was a welcome return home. The garden is fully tumescent with summer's sap. One cannot quite believe the change from late spring to summer's full bounteousness. It seems incredible that Mother Earth holds so much energy and magic.

And the en primeurs are moving. My cold feet at having bought so much are warming like summer's soil. I have refused to buy a couple of wines. Unnamed, one property launched this year at over €160, was last vintage €40. Good it may be, but I cannot bring myself. An offer of Cheval-Blanc was rebuffed. €700 a bottle first tranche. No thanks, but thanks for thinking of me. Next day, second tranche at €900. Who's buying this stuff? I think we all know the market has moved east.

Well, that's it. Are we to become a Bordeaux divorcee of a market? Will all our years of supporting that region's trade amount to nought, as we are passed up for emerging economies that offer a cash-stuffed, newly-educated client base and a significant income stream?

The Bordelais have been, historically, highly pragmatic when it comes to business. From my experience, the men in suits in that French city are drawn like flies to trade that is easy, offers significant access to ready money. Regions in the first flush of a wine obsession especially those who, in the infancy of their buying culture, are not especially influenced by such underlying questions as vintage quality, perhaps even price. But perhaps the French do not fully understand the Chinese. Again, for what I have experienced, the Chinese prefer to develop a relationship over time before trusting one enough to offer one a trading partnership. Thereafter, they are extremely loyal. If the Bordelais are as blunt and unsubtle in their dealings with the Far East as they have been with much of the rest of the world, I anticipate some unrest.

In addition, the new Chinese market, in its adolescence, is highly susceptible to fads and fixations. All it would take would be one taipan, one respected wealthy collector, to turn to say, burgundy, the wines of the Rhône Valley, top champagne or other, and the Bordelais might come to realise that bridges have been burnt.

Anyway, for the time being I am busy selling some very expensive claret and the children have hand, foot and mouth disease, which is making them irascible. Welcome home!
Copyright © 2022 Bowes Wine Ltd  |  All Rights Reserved