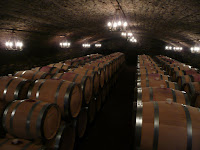 
The weather is changing. We emerged from the cellars of Domaine Drouhin-Laroze in Gevrey-Chambertin an hour ago or so and the leaves were throwing themselves about listlessly in the yard, the trees' smaller branches twitching as if in nervousness at some approaching event. And the Alsatian had stopped trying to eat the cat, which was nice...especially for the cat.

It was an earlier start as I had to be in Vosne-Romanee - necessitating a blast up the peage - at 08h30. I hadn't been to the Domaine Mongeard-Mugneret in 17 year or so and I had quite forgotten where it was. Noticing a young woman standing outside the Domaine Confuron-Cotetidot I asked her if she could point me in the right direction. She shrugged Gallicly and had another pull on her breakfast fag and regretted that she couldn't help. Twenty minutes later, I pulled up outside the domaine. It was 15 yards from where the young woman had been standing.

Mongeard-Mugneret do not, now, involve themselves in en primeur business, preferrring instead to market their bottled wines one year later. Thus I got to taste a range of 2008 wines, as well as some '07s.

I have to tell you that 2008 is going to go down in the history of this region as a very great vintage for reds, probably for whites too. The wines are vital, energetic, fresh and pure and expressive and very, very age-worthy. Snap some up if you have yet to do so. There were some very good examples at Mongeard-Mugneret. I will explore the possibilities of doing business here.

It's a short drive through Vosne to the house and cellars of the Lamarche family. We tasted the '09s out of barrel, although many of them were hard to analyse as they had been racked just days before, an activity than sends wine deep into their shells. Nevetheless, the quality here is evident. This is a brilliant vintage here.

Ascending, we pulled up chairs upstairs and shared a German pilsner, after which Madame Lamarche produced a half bottle of something unlabelled, quickly opening it and pouring out a wine that had lost all trace of redness. I guessed 1969; too young. 1964? No, no. Frustratingly, Madame was unsure what the wine was, but knew it to be from the 1940s and suspected that it was a Pommard, possibly as Epenots. It was still bearing fruit, was cedary, fresh, with a flavour of those coffee hard-coated biscuits. A fascinating antique!

We were invited to lunch to the Lamarches and drove to the restaurant Simon in Flagey-Echezeaux where I was indulged with snail ravioli and veal sweetbreads. I stuffed a quick mouthful of epoisses in my mouth and made my excuses. I was late for my next tasting.

Rossignol-Trapet have been biodynamic for some years. Their wines are superb; better each vintage. Nicolas Rossignol showed us the range and we found succulent wines of beautiful fruit.

The style at Drouhin-Laroze is different, although we tasted wines from many of the same appellations as we had at R-T. These are intense, vastly long, structured and pure. I continue to find an affection for Chapelle-Chambertin...and we finished with the 2009 Le Musigny. If that doesn't light your blue touchpaper, I don't know what will!

Home tomorrow...but one last chance to catch some calories in Beaune!