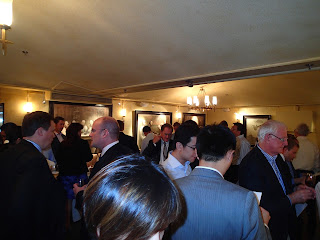 Just about room to move at the Bowes Wine 10th anniversary tasting
at Crown Wine Cellars in Shouson Hill
A very fine and pleasant dust is falling following Bowes Wine tastings in Hong Kong and Singapore, the pair of them separated by just four days.

Tasters in both locations assembled to sample about 30 wines, virtually all were of the French 2009 vintage and focussing on Bordeaux, Burgundy and the Rhone Valley.

There's always some trepidation when showing wines that have been shipped around the world, even if they have had a chance to settle on arrival (I conducted a tasting in Singapore many years ago during which every single wine entirely shut down just before the guests arrived. Trying to enthuse about liquids ?that have no more flavour or aroma that freshly-drawn well water to which tannin and/or acidity and raw alcohol have been added is not an exercise I'd care to repeat).

I arrived at Crown a couple of hours in advance of the starting gun and went about the wines with a waiters' friend. The Quality Control tasting that I undertook thereafter allayed all my fears; these were wines that were fully open and willing to speak really quite intimately with the taster. In short, they were delicious, every man jack of them.

So, guests arrived and our house Blanc de Noirs Champagne from Larnaudie-Hirault was poured to welcome all comers. It was a fine frontal bookend to the ensuing 2009 party (for that is what it really was: a drinks party with a focus on gaining some familiarity with one quite extraordinary harvest).

So it was in Singapore. Rather fewer tasters assembled in a slightly smaller venue, yet the result was the same.

Interestingly, the Singapore wines were in a quite different state to the same examples in Hong Kong. And whilst removing the foils in the early evening in advance of uncorking everything, I spotted ominous puddles of wine on top of the corks of two of the reds. I need not have worried. All wines were communicado, albeit not quite with such fluency as those in Hong Kong, especially the clarets for some reason.

For my part, these tastings served to confirm that which I already knew: 2009 is one delightful vintage and one entirely unprecedented. Cool wines of distinct terroir, yet ripe, hugely tannic and with high alcohol. How this balancing act has been achieved is quite beyond me. In many ways it doesn't make sense at all.

I scratch my head a bit when trying to name the vinous highlights. In Hong Kong Grand-Puy-Lacoste was a complete hero. The white Domaine de Chevalier a laser-driven herbal nail hammered into one's palate. St Aubin 1er Cru  En Monceau from Marc Colin and Chassagne 1er Cru Les Fairendes from Morey-Coffinet revealed exactly why I buy this pair pretty much every year, the former crystal-bright and stuffed with minerality, the latter a wine having little truck with subtlety, but rewarding the taster with flavour in spades.

Too many to name! The pairing of Rieussec and Climens was a sublime one. If someone wanted to know the difference between the wines of Sauternes and those of Barsac, one would only have to pop bottles of each.

2002 Pol Roger. Ahhhh! And I can say no more than that on the subject.

Beaucastels red and white; La Dominique; a pair of Cote Roties from Barge and Rostaing, and the two wines of which I was, perhaps, proudest: the Volnay 1er Cru Les Champans of Joseph Voillot and the Meursault 1er Cru Les Charmes of Buisson-Charles: a pair from two producers overlooked and undervalued, save by the cognoscenti. I hope I have gone some small way to redressing this imbalance.

And I would like to thank all who attended. I had the sort of time that a 10th anniversary merits i.e. a happy, wine-y evening surrounded by smiling, friendly people. I couldn't have asked for more.
Copyright © 2022 Bowes Wine Ltd  |  All Rights Reserved