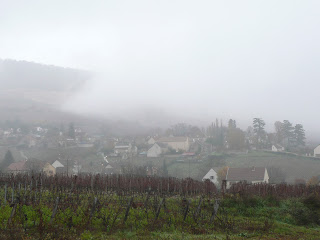 Like a cross between Hobbiton and Mordor: Burgundy village wreathed in fog
Recent news of note is that Robert Parker has sold a share of his business to three young Singaporeans for US$15M. He remains at the helm, with chief editorship going to Lisa Perrotti-Brown MW, formerly Parker's Asian editor.? What does this mean, I wonder. And what, if anything, will it change?

I have already commented on this on Facebook. On a personal level, I sincerely hope that this might be the moment we leave the Dark Ages (in wine journalism/writing terms) and enter a new, modern, golden era in which we leave a great deal of silly baggage behind.

In my view, it is time for a sea change: a complete about-face. I would like wine to be written about respectfully, imaginatively, inspirationally and in an utterly non-judgemental way.

That is not to say that wine writers shouldn't have opinions about wine. There will always be observations about wines. For example, if a wine has high acidity, it would make perfect sense to suggest it is drunk with the appropriate food and perhaps not as an aperitif. But to taste it alongside a tranche of its peers and to dock 5 points from the score you give it solely because it is more acidic than its neighbours is utterly unacceptable.

Another problem with writers issuing absolute judgements about wines is the way in which it baffles the consumer and confounds the wine trade. Here's why:

The wine trade is (or should be), in my opinion, a level playing field. The consumer buys wine from the merchant from whom he or she enjoys buying wine, whether that is because the merchant is an old school friend, a member of the same club or, most pertinent of all, because they sell the wines that the consumer likes to drink. This is the ideal.

But what so often occurs these days is that merchants send their offers to their clientbase and a proportion of those clients will then research the scores that Robert Parker and others have given the wines on that offer. Should the scores not be favorable, the merchant's opinion is deemed to be questionnable, his judgement suspect. This destroys (or, at best, damages) the relationship between merchant and customer and the net result is that the consumer has no sort of relationship with any wine merchant, cherry picks from various lists by following the scores they read in magazines and on-line and end up chasing 95-pointers, instead of trusting someone in the trade - someone who, given half a chance, would endeavour to discover their personal vinous proclivities - to find interesting new things for them to try.

I repeat, I would guess that 80% plus of the wines I get to taste would give someone great pleasure to drink. These are wines that, if they were to be described imaginatively, someone might buy and feel rewarded for having done so. Casting worthless judgement that can only be entirely subjective and, further, relevant to a single time and place (usually far removed from a drinking-for-enjoyment scenario) is unbecoming and disrespectful to this most precious liquid.

I say it again, over the last thirty years, wine writing has most often been harmful to both the trade and the consumer. Please, please can we write about this subject we love in a more measured and intelligent way?
Copyright © 2022 Bowes Wine Ltd  |  All Rights Reserved