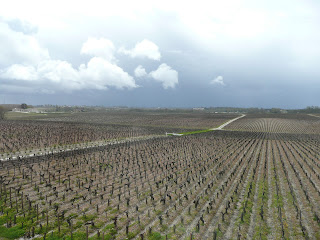 What is it with France? So often I have trouble sleeping and last night was no exception, with me waking at 04h05 and alternately punching my pillow in the darkness and reading my book until about six o'clock, when I fell into a deep sleep only to have my alarm wake me shortly thereafter.
So, showered and breakfasted, I hauled my mildly numb carcase over to Chateau Palmer (fortunately not five minutes distant) and tasted there. And from Palmer it's a short hop to Chateau Margaux itself: my second appointment. Then, in no particular order, came Pichons Baron and Lalande, Latour, Mouton-Rothschild and Pontet-Canet (from the window of which the above photograph was snapped and subsequent to the tasting offering a lunch of the highest quality, a meal that majored on beef cheek and concluded with a cheese buffet that resembled the diary counter of an especially obsessed deli owner).

Lafite, Calon-Segur, Cos d'Estournel and Montrose, Durcu-Beaucaillou and Leovilles Lascases and Poyferre followed lunch and at close of lay I was thoroughly ready to call it quits. And I started to write this post on the balcony of my hotel; had just started to load the day's photographic evidence onto my laptop, when a persistent drizzle started: bad for laptop, camera and both the beer and cigar for both of which I had just started to feel real affection. Of course, what you really want to hear about is the wines. What're they like? Or perhaps you don't. Maybe Bordeaux and its wines are still failing to raise even a passing interest in a world jaded by best-ever vintages and whiplash pricing. Well, if you are interested, here's what I think so far:
2012 has produced many wines that'll give great pleasure to the end user. They are fresh, ripely tannic and many boasting the sort of pure, delicious fruit that wouldn't feel out of place in the orchard at Highgrove House. I have had a slight problem at one chateau today and that was Calon, where I found the Cabernet-based wines - Capbern-Gasqueton and Calon itself - rather swingeingly acidic and a bit stringy. Where this is due to the recent change of ownership, effected in November 2012, I don't know. Everywhere else has shown liquids of real substance and class.
And I will repeat a point I have made before. It is time collectors went back to buying particular chateaux year-on-year. Vintage has become an aspect of terroir, combining to create individual wines that will never be reproduced in any other harvest. To have the chance to compare 2008, 2009, 2010, 2011 and 2012 harvests from a property like Leoville-Poyferre in the years to come will be a sensory lesson of the highest order. Forget the nonsense about good and bad vintages; there's no such thing. There are simply harvests of differing characteristics. And '12 is a goodie.
Copyright © 2022 Bowes Wine Ltd  |  All Rights Reserved