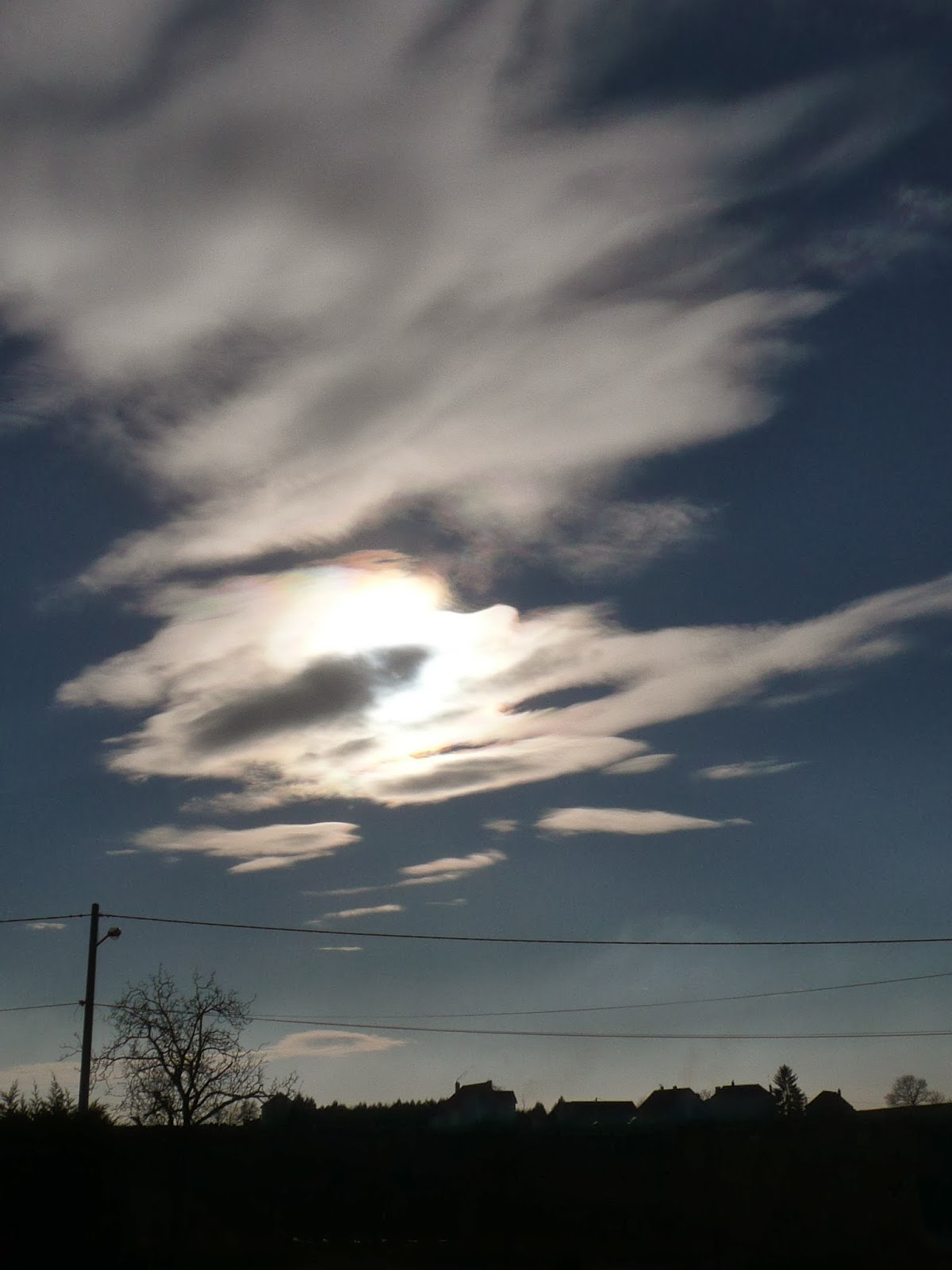 The sky outside Domaine Jean Pascal this afternoon

I left home at 09h40 yesterday morning and immediately started to encounter some of the most classically endowed Sunday driving imaginable. This activity continued right up to the time I hit the far side of the Eurotunnel and included a period on the M25 during which I saw at least two drivers using a hand gesture reminiscent of that employed by Gareth Hunt in coffee advertisements of the nineteen seventies.
After the stressful cut-and-thrust of British traffic, driving on French roads is a cake-walk. (Note to self: look that one up in Brewers.) I arrived in Beaune at 19h35 local time feeling in need of a short walk with a beer on the end. The walk was, indeed, short and in fact ended at Bissoh, a Japanese restaurant not far from my hotel. Recuperation took the form of several smallish courses and a half bottle of white Maranges.
A hard bed made for a restless night, but all was in order by the time I was collected from my hotel. The day had dawned bright and cloudless. I felt the onset of some photography.
And the day has been spent in the Cote de Beaune, starting in Meursault. I have tasted at Domaine Michelot once before and liked the wines, but didn't have room for them in an offer. From what I remember, and however good the wines were before, what I tasted this morning was from a more senior league. These are stunning whites of great clarity, exhibiting a great deal of terroir. I will try my hardest to squeeze these into an offer somewhere.
From Meursault, we drove to the top of Chassagne where the domaine Paul Pillot nestles in the middle of the 1er Cru vineyard of Clos St Jean. Father Paul is steadily giving way to his son Thierry, but is evidently still highly motivated since, despite the fact that he had been urged by his doctor to take some time off following his breaking of several small bones in his feet (he jumped down off his tractor and landed awkwardly), he was bustling around - albeit whilst limping heavily - and pulling heavily loads on a pallet truck.
What wines I tasted here are fabulous. One cannot forget - one is reminded at every domaine one visits - that 2012 was a pathetically small vintage, especially in the Cote de Beaune. Jean-Pierre Charlot, our last visit of the day, told us that he had 60% less wine than the average harvest. I have felt lucky to be getting any wine at all...
...and what wines. Thierry Pillot showed us 2012s, red and white, that matched purity to intensity, energy to concentration. And this was something I noticed all day, qualities we saw at each domaine we visited.
We lunched - perhaps rather too well - in Chagny, a rather dour town not far from Chassagne and then headed back to a producer just a couple of doors down from Pillot: Domaine Morey-Coffinet. Thibault Morey has taken over the wine making here and he's a laid-back character with an easy sense of humour that makes him an extremely affable tasting companion. Again, electric wines here, both the whites for which I domaine is best known, and also the reds.
Chassagne to neighbouring Puligny to the winery of Jean Pascal. Having drunk a delicious bottle of the 2011 Bourgogne Blanc from here a few nights ago, I was looking forward to this stop. If anything, the '12s are even better than the '11s. Bourgogne Blanc punched like a super-heavyweight in a featherweight boxing ring, whilst the village Puligny offered serious size and a finish that powered on and on and still hadn't wrapped up by the time the sample of Puligny Folatieres was poured. This had a level of complexity and class yet greater. I left in awe. These offer great value, too.
And lastly, to Jean-Pierre at the Domaine Joseph Voillot in Volnay. J-P's about to go off to the Cape Verde Islands on his holidays, but was happy to show us his fabulous '12s. This guy is the real deal; his wines offer levels of elegance and beauty rarely found. You can probably tell that I absolutely love them!
Busy day tomorrow, but not before dinner  in Beaune, to which I am keenly looking forward.
Copyright © 2022 Bowes Wine Ltd  |  All Rights Reserved