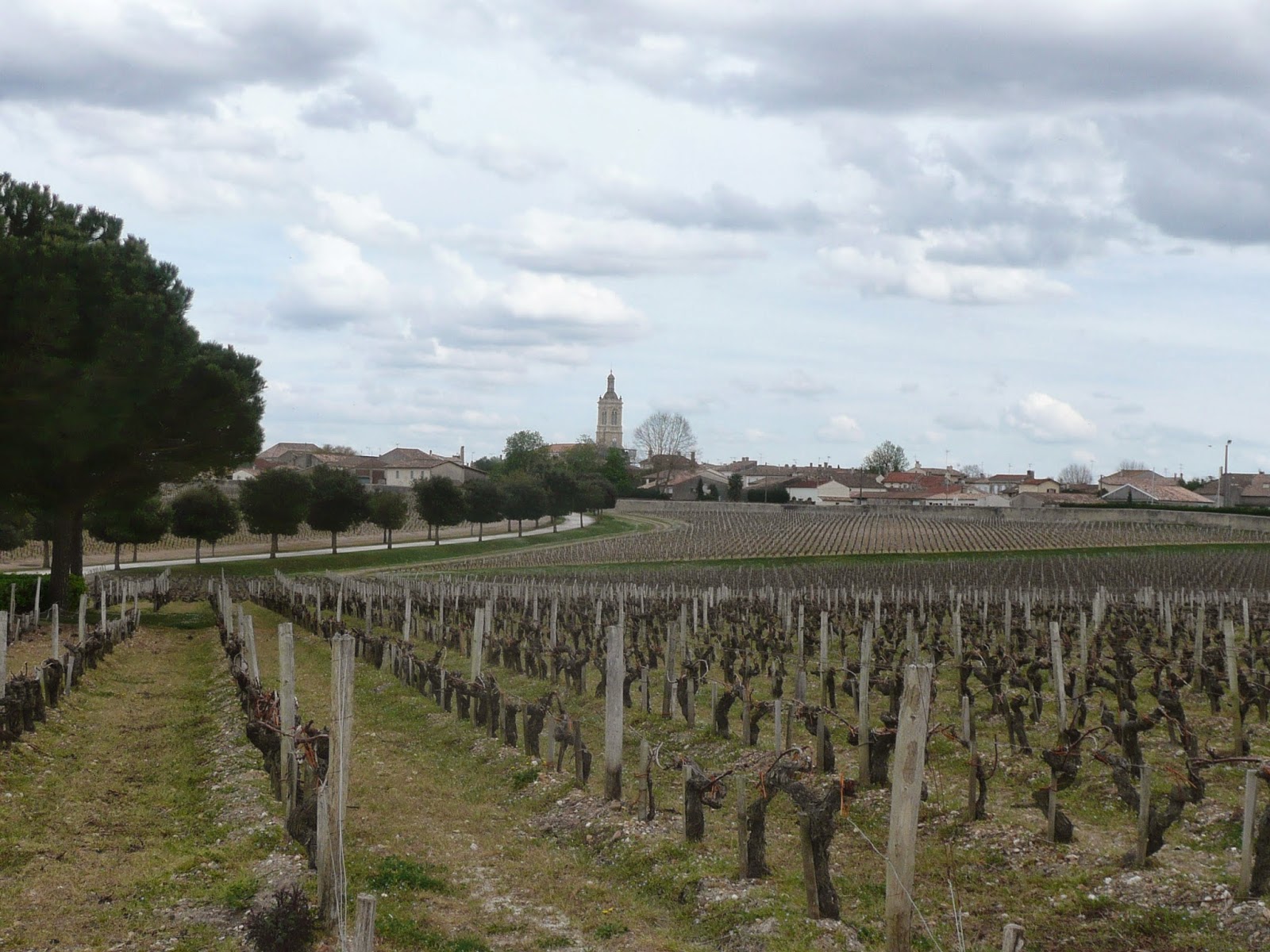 St Estephe from the driveway of Calon Segur

It's been an easy day of tasting is some senses, rather less clear cut in others. And the sun has been shining on the Medoc; glimpses of the Gironde afforded at Montrose and elsewhere have been of water sparkling under bright French sunshine.

An easy flight from the UK dropped me into Merignac, Bordeaux's airport, long after sundown yesterday. I'd made the most of Jamie Oliver's restaurant at Gatwick, so didn't require refuelling before bed and an annoyingly inconsistent night's sleep.
I am staying in Blanquefort, just 5-or-so minutes from the Rocade, Bordeaux's ring-road. Other than last year when there was something of a mishap with the reservation, I normally stay here. Unless one is to uproot oneself mid-week for other lodgings, it is the most centrally located place, whilst at the same time managing to be not especially close to anywhere convenient, save the Bistro du Medoc, a pleasantly informal eatery within walking distance of the hotel (which itself has a rather good resto, albeit a bit pricey for daily fare).

In chronological order, I have today tasted at Ducru Beaucaillou, Pontet Canet, Mouton Rothschild, Montrose, Cos d'Estournel, Lafite, Calon Segur and Grand Puy Lacoste.
Listen...I have to share some insider info with you, as I am not sure you will hear it from another source. Bordeaux vintages of properly gopping wines are a thing of a past. The wines I have tasted today will give the drinker pleasure in the years to come...and not many years to come either. Some of what I have sampled in the course to today's activity will drink from the moment it's in bottle, others will require a few years to round out, but not many. Even the first growths will be ready, I suspect, within a decade quite comfortably.

That they won't require long ageing is not an issue and doesn't make them "bad" wines. That they generally have much less colour intensity, likewise, does not render them unworthy of interest necessarily.
But what I would mention is that, whilst I found minerality in a number of wines (as one would expect from a cooler growing season), I also detected the hand of the wine maker to be dictating style. Effort has been made to make these wines what they are: effort that was required in the face of extreme adversity.

In many wines I find a lack of dimension: a simplicity, a dearth of nuance.
From what I have tasted today, both 2011 and 2012 offer more interest than '13. If this vintage is not significantly cheaper, I see no reason to buy it. But then maybe the merchants don't have to. There is much here for the restaurant trade.

I sit writing this outside my hotel in my shirtsleeves in 20 degree temperatures, with clouds building overhead and a beer under my belt. I am rather enjoying the solitude of travelling alone and I intend to make full use of that nearby bistro later on. Tomorrow is a big day of tasting and perhaps the qualities of the vintage will come into clearer focus during its course. I will, of course, write more tomorrow.
Copyright © 2022 Bowes Wine Ltd  |  All Rights Reserved