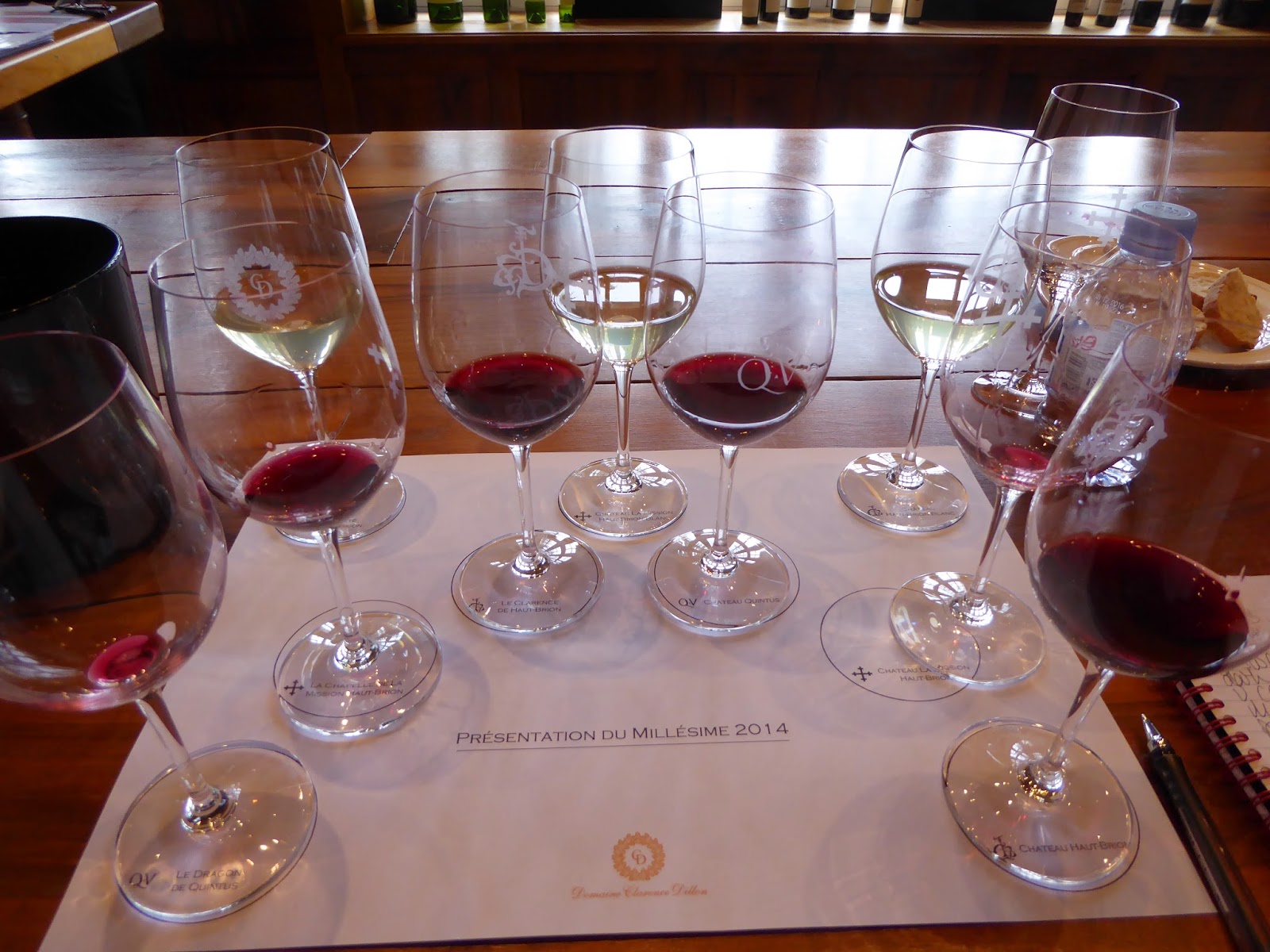 I headed off to La Mission Haut Brion mid-morning fully realising that my timing would make me early for my appointment there, but also mindful of the fact that a solo taster such as myself can often wangle an off-the-cuff slot at the drop of a hat. So it was that, in short order, I found myself before the scene you see above.

There are, as you can see, nine wines to think about these days, whether one is tasting at La Mission or Haut Brion itself, over the road (and I seem to do roughly two years on, two years off).

The wines are very lovely here. And in '14 the differences between the two grands vins is utterly fascinating. At this stage I preferred Haut Brion, as it had an extra level of purpose and energy: notable, as it is usually the other way 'round. Whites were also a delight.

The UGC this year is at Smith Haut Lafitte, so I jumped in the car and, as every year, marvelled at the distances involved in getting from one celebrated bit of Bordelais vineyard to another.

I have to say that reds and whites both offer a great deal to interest the taster/drinker. If I had to mention just two wines, one of either colour, I would cite the red Carbonnieux as offering an extremely elegant and, I think, true expression of the 2014 vintage, and the white Malartic Lagraviere for being simply sensational. That is not, of course, to say that there weren't a great many other lovely liquids in the room. Wait for the offer to read more.

Between reds and whites I took a break for lunch and sipped cautiously on a glass of white SHL, not 100% certain that it wouldn't force me into a terminal nose dive after my late night. Fortunately, all was well.

La Lagune was to be my next stop, so it was back on Bordeaux's crawling ring road, past my hotel in Blanquefort and on a short way into the southern end of the Medoc.
You'll just have to take my word for it that sampling quite so many sweet wines, one after the other, is something of a chore. This is despite the fact that there were some absolutely delightful examples. This is not a great year for these wines, I think. But many have fine, lemon acidity and bright fruit and will make delicious drinking. Not that we'll sell many, of course!
And now I am back in my hotel and have just remembered that I omitted to drop in at Grand Puy Lacoste. Although I tasted GPL at the UGC tasting, Haut Batailley was absent, so I am sorry to say that I have missed out on that pleasure this year. I imagine it is very good, as GPL itself is really very delicious indeed.

Off across the water tomorrow, as St Emilion and Pomerol beckon. And then I fly home tomorrow night, hoping very much that a hole will open in the gales that have been afflicting the UK, permitting a safe landing at Gatwick...
Copyright © 2022 Bowes Wine Ltd  |  All Rights Reserved