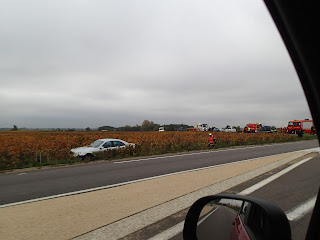 A Mercedes, spotted this afternoon, inconveniently
parked on a Cote de Beaune vineyard

It's been a fine first day in Burgundy after my train journey yesterday. I'd never traveled to Burgundy by railway, but had been advised by those with experience of such things that it was, in short, a doddle. And a doddle it was. Quick glass of champagne for elevenses at St Pancras; train to Paris Gare du Nord; something called the RER (Paris's suburban rail system) to the Gare de Lyon (but two stops) and then an express to Le Creusot, which lies south of Beaune.

I have tasted at five domaines today and will mention three of them for one reason and another.

Oh, and before I start, I'd better tell you about the 2014 vintage: the reason for my sojourn in the region. The best wines are utterly exquisite. Burgundy producers - at least the ones I visit - appear to be ramping up their efforts year-on-year and, as a result, I so often find myself at addresses at whcih I feel that I have never tasted better wines. Example...

First thing this morning and an appointment at Dezizes-les-Maranges in the far south of the Cote de Beaune and the estate of the young Bachelet brothers Marc and Alex. It was Marc who received us and Marc with whom we discussed the vintage, tasted the wines and from whom we heard the local current gossip.

I will NOT cease to say to anyone who will listen: these guys are the real deal; the wines properly grown-up burgundies of both hues. I truly believe that growers of Chardonnay are only now truly understanding how to make properly profound and communicative, characterful wine from their fruit. Marc and Alex are at the forefront of this new wave: a tide of the utmost brilliance. I was, quite simply, awe-struck. To combine such race and vim with such transparent communication of terroir is a miraculous thing to witness. All these wines are crafted with the same attention to detail and detailed thought, from Bourgognes Rouge and Blanc to the Batard-Montrachet. Insane quality here.

Later, the white wines at Domaine Jean Pascal in Puligny. These wines are - this domaine is - almost unknown. Waitrose buy up one of their 1er cru Pulignys in toto, but there is such brilliance and value here. I am excited to be among the first to appreciate a producer who is sure to become better known over time. And I suspect that the value will become less pronounced over time. But for the time being, these are loaded, vastly characterful white burgundies and I love them.

Then, last appointment of the day, Volnay and the Domaine Joseph Voillot. I have just arrived back at my hotel having driven directly from the tasting with Jean-Pierre Charlot, wine maker and son in law of the late Monsieur Voillot. Can these wines get any better? I can still taste them. They lay out the qualities of the 2014 vintage succinctly and with riveting purity of fruit and precision of structure. I was almost overwhelmed by the excitement of these wines. Hell, it is precisely because wines like this - producers like Jean-Pierre - exist that Burgundy is such an obsession for so many wine lovers. Most of J-P's '14s will keep 25 years and a great deal longer and will never be anything less than extremely profound and beautiful. Paradise found.

Must away, as dinner is calling. More adventures in Burgundy wonderland tomorrow...
Copyright © 2022 Bowes Wine Ltd  |  All Rights Reserved