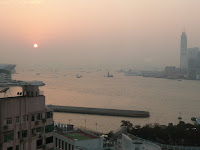 The sunset view of the harbour from my hotel window

Contrary to expectations, the weather in Hong Kong is behaving itself admirably. Humidity is on the low side for the time of year and temperatures remain in the high twenties, rather than low thirties. Sure, one is only aware that it's a clear day because the particulate haze has turned a sort of a dirty blue colour, but I can see Kowloon from my hotel window, even the hills beyond and this is not always the case.

I've wanted to visit Da Domenico in Causeway Bay for some time. A number of clients have waxed lyrically to me about this most Italian of restaurants, the observations usually taking the form of high praise for the food, low contempt for the crumminess of the service and advice about the voluminous size of the cash pile one needs to take along to cover the bill.

We were thus pleasantly surprised to be "meeted and greeted" in kindly fashion and throughout the meal the waiting staff were chummy and helpful. The menu's a short list of dishes constructed from ingredients flown in from the motherland three times a week; I say constructed, but like all the best Italian food, this is unfussy fare, simply put together and very tasty. Don't be fooled by the fact that the menus are hand written and inserted into office stationary cupboard-style plastic folders. "How often do you change the menu?" my dining companion asked. "We have never changed the menu", was the response.

I had been advised to take recommendations from the waiters when ordering and it was on that advice that we started with a plate of burrata cheese, cherry tomatoes, rocket and basil. I've never encountered this dairy product before and can best describe it as a cross between thick cream and mozzarella; sweet, almost ice-cream-like; slightly weird, but utterly wonderful. The spice of the rocket and the acidity of the tomatoes cut nicely through the cheese's flamboyant gooiness.

Langoustine linguine followed, a perfectly sticky tomato sauce gluing together the ingredients. As with a familiar jazz standard, one doesn't really need to engage the brain to appreciate the quality of a really decent pasta dish. This is real food and one's tongue recognises it as such.

We eschewed the red mullet that the waiters suggested. These fish when baked whole can make tasty eating, but their structure of tiny bones makes for boring work. A fillet is a better prospect altogether. And so we opted for veal and shared dishes of chop and liver. Both were superb, the chop lightly pink within, juicy, with good flavour and a welcome chewiness, the liver soft and succulent, both perfectly cooked.

We drank Anselmi's 2006 Capitel Foscarino to start. A clean white from the Veneto, it offered a good weight of fruit. I would possibly prefer it with another 6 months of age to it, something that couldn't be said of the red that followed it: 1997 Brunello Riserva San Felippo. Like the best reds in a proper state of maturity, this wine changed constantly in the glass. There was that familiar mature Brunello aroma that I can only liken to singed hair, a touch of inkiness, nuts and black cherries. The fruit across the tongue was rich and complex and we felt well rewarded. Guado al Tasso appeared on the list at the same price, but they were out of stock. The Brunello made for a highly viable alternative!

Other diners were mostly locals. Anthony Leung popped in for a takeaway.

We had been joined by another friend who had a single plate of pasta and a couple of glasses of wine. The whole bill was in the region of HK$5,800, so it's a sort of once-in-a-while kind of a place. I would like to explore the menu further at a later date.
Copyright © 2022 Bowes Wine Ltd  |  All Rights Reserved