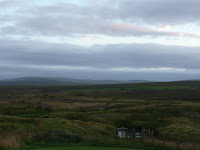 
I've just returned from the north of Scotland and feel as though I have lost weight, despite the fact that we ate and drank very well in the sizeable and highly comfortable lodge in which we found ourselves staying. The reason for my sense of diminution? Attacks by that most dreadful of airborne menaces: the Highland midge. Clouds of these beasts - referred to, with no hint of affection, as "teeth with wings" - roam parts of the landscape where water is to be found (being on a fishing trip, we were right amongst it), looking for hapless victims on which to feast. They gain ingress to ears and nostrils and generally tip one to the brink of madness in short order.

There is little to be had in swatting at them. A local saying has it that "kill one, there'll be a million at the funeral". The only option is to smother oneself with some sort of unguent. Rummaging around in my bag, I came up with a pretty antique bottle of something that might do the job: Crocodile, a herbal insect repellent. Being of some bottle-age, the stuff was of an appearance and had an aroma not unlike, I suspect, the desiccated pee of the animal for which it is named, but with squadrons of micro-vampires on the loose, who was I to be picky?

Suitably smothered in oily yellow gunk, I was overjoyed to find that the midges either avoided me or expired soon after landing on my skin. It is possible that I have sustained some lasting damage to my epidermis from the application of such a venerable balm, but I care not. Sanity prevailed. Not only that, but fish were caught, and on one of the most beautiful waterways one could wish for.

Now back home in Wiltshire, we wait upon the arrival of baby number 2, due in 5 week's time. Joseph has treated his third year of existence on Planet Earth in classic fashion, becoming really quite determinedly tantrumic. Whether the new arrival will calm him down or act as catalyst to his wild moods, I know not, but am beginning to wonder whether prayer might help.
Copyright © 2022 Bowes Wine Ltd  |  All Rights Reserved