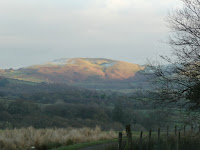 The late afternoon light falls on a Powys hill

I was in Wales on Monday and Tuesday this week striding out over the hillsides. The weather was messing about, forcing us to squint in crystal sunshine one minute, then blackening the sky and pelting us with hard snow pellets the next; pellets that were driven by the wind to sting the back of our ears like peppercorns fired from a shotgun.

We threw ourselves down in armchairs when back at the cottage, feeling distinctly spent as the light drained quickly from a dour sky, but we warmed up with tots of whisky as we opened the wines we were to drink with dinner. It was a rather fine range, too, selected to accompany fresh pheasant.

We drank 1998 Château Beau-Séjour-Bécot, 1998 Chapelle-Chambertin Pierre Damoy, 1993 Gevrey-Chambertin Clos St Jacques Armand Rousseau, 1998 Masseto and '77 Taylor. Earlier in the day, with lunch, I had shown the 2001 Palomero that we recently offered on our Backfill & Diversify series (one thought it the best wine of the day; it came across as much oakier than I remembered, but fabulous, rich, structured and age-worthy, nevertheless).

The pheasant is delicious: Nick's speciality, and cooked with apples and (usually) flambéd with calva. Alas, of calva was there none, so the incendiary element was substituted by brandy.

The 1998 BSB was delicious and young tasting StEm with a rich future ahead of it.

The Chapelle I originally tasted with Pierre Damoy (a rather garrullous and opinionated young man) when I visited the estate to taste the '99s. Pierre was still bemoaning the fact that a number of tasters had marked down his '98s the year before. The 1998 vintage as a whole was very hard to taste in its infancy, many of the wines having a hard, even metallic edge and I had heard stories that Clive Coates had been banned from Damoy's cellars after an unfavourable report.

Pierre became increasingly heated until he disappeared and brought out two bottles of '98 Grand Cru: the Chapelle and the Clos de Bèze. We opted to uncork the Chapelle and it was marvellous. I suspect that the best 1998s will always have more in the way of terroir than their 1999 counterparts and the Damoy wine had it in spades...which was why I bid a speculative £240 at Sotheby's some years later and was surprised to be rewarded with a dozen bottles, of which this was one.

It's still very much a young wine, but is so delicious that it is hard to stop drinking it. I suspect that it will all be gone before it exhibits a fully tertiary character. I suppose I'll have to keep examining the auction catalogues!

The 1993 Clos St Jacques is an odd one. The last two bottles I opened smelled and tasted quite brilliant after opening, before either clamming up or falling down: most frustrating. This bottle, however, just kept powering away. Subtle and ethereally complex. I had been thinking of selling my other bottles, so much have Rousseau's wines risen in the secondary market. I will hold now hold onto them, I think.

Masseto. This is a 100% Merlot wine from a parcel of vines in the Ornellaia vineyard. First commercialised in the late 1980s, it was straightaway called "the Petrus of Italy". Well, okay, so it's delicious: brambly, velvet fruit etc. But this I really am thinking of selling. I can see stock on the internet at £291 to £336 a bottle and brambly, velvet fruit, however delicious, just doesn't add up to those kind of numbers.

I am embarrassed to report that the port was somewhat lost in a lively conversation that, presumably, was fuelled by the good bottles that preceded it. I remember a wine that had paled quite considerably with age, but was toothsome and mellow.

And I am sorry to say that we then drank a few nips of Tobermory malt whisky. Never the twain. I know, I know. The next day's walking was slower and distinctly more heavy-footed.
Copyright © 2022 Bowes Wine Ltd  |  All Rights Reserved