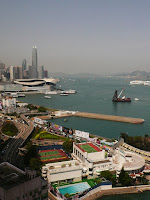 A(nother) view from my hotel, with the Yacht Club in the foreground, the Exhibition Centre (the white cockroach in the middle ground) and IFC2, towering in the distance

I climbed into a taxi on Saturday evening and, in turn, the taxi climbed, ever higher, up The Peak. Atop that illustrious mountain, perched high in a zone that must render life very interesting during a typhoon, stands a residential block called Eredine and it was here that I had been kindly invited to dine.

I suspect that the view would be of interest to most of the expat children I know in the SAR, as one looks down directly onto the roof of the Matilda Hospital where many of them would have been delivered into the world. But the span of view beyond is breathtaking...as was the list of wines that we consumed before, with and after dinner.

To be welcomed with a chilled magnum of 1993 Vilmart Coeur de Cuvee was a treat. The second magnum was a blessed indulgence. Both were rich and mineral, with a properly small bead.

2004 Gewurztraminer Grand Cru Altenberg de Bergheim from the cellars of Martin Zahn was mouthfilling and full of that rose petal and lychee fruit that typifies the best Gewurzes. It went superbly well with rillettes.

The 2004 Pouilly-Fume La Grande Cuvee from Pascal Jolivet had lost that lance-like grassiness of youth and mellowed into a delightful mouthful.

Then came the 1997 Grange. Bought in Papua New Guinea, there was some concern about whether it would be in good nick, but the concern was unfounded. Every so often one tastes a wine that seems intent on changing every time one returns to it. So it was with the Grange, which went through stages of fruit and spice that boggled the mind, finishing with a note reminiscent of those soft, spicy biscuits that the Germans eat at Christmas time.

Another Gewurz graced the table for pudding: the 2003 Vendange Tardive from the same vineyard, same producer as the above. Rich and thoroughly kinky in every way, it made one get up from the table feeling as though Bacchus was hovering near and smiling down on the diners.

Bed was especially soft that night!

Sunday found me boarding a ferry to Discovery Bay on Lantau Island. DB, as it's known, was for years something of an object of fun in Hong Kong. The company that owns the plaza kept rents excessively high, resulting in the rapid closure of any restaurants or other businesses that opened there. Now, all has changed, and the plaza bustles with diners and drinkers and those strolling with children and friends. It is a much more fun place in every way.

I lunched at a table of 14, including my host who has a stake in the restaurant: Fagara, a Szechuan eatery that couldn't be a better spot for a relaxed (and increasingly spicy) Sunday lunch. Course after course was presented at table, ending with a dish that looked like a bowl of chillies, but turned out to contain other ingredients too, just not very many of them. Those who know me will know the deep-seated problem I have with chilli. I am one of those happy people who gets a rush of endorphines after consuming it, thus I was quite in my element.

I was, however, being quite circumspect about what I ate and drank as I was to dine later on. But we sat on the balcony after lunch, gently sipping sweet wine and I gradually started feeling as though further food - and even wine - would not entirely be superfluous to requirements. I called my dinner host, who kindly came to collect me in his golf cart.

Golf carts are the mainstay transport for DB and their numbers are limited. I heard about someone leaving the place recently who sold his cart for over a million HK dollars: a price that reflects the buggies' rarity, rather than quality!

On my host's balcony, we drank 2000 Corton-Charlemagne from Bonneau de Martray and it was quite enough to put me in the mood for dinner! The nose has started to mature into that funky mineral nuttiness, the palate rich and retaining the proper thrust of stony fruit. Another treat!

We dined at Manta Ray in the plaza. The last 18 oysters had been secured that afternoon, so we started with them. Small and French and sweet and lovely: a sort of saline Vanessa Paradis in every mouthful.

What a weekend! Full of fabulous flavour and relaxed company. I have been to the gym this morning in am attempt to shed some of the poundage gained over the last week or so. I have to say that the exercise bike seemed like an instrument of torture.