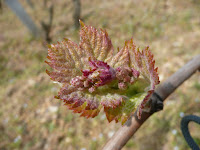 
I have just wandered back from dinner at the Brasserie du Medoc in Blanquefort where one can obtain a gesiers-filled salad starter followed by confit de canard and chips for €20. It's just as well there's a 10 minute walk back from the restaurant, as I feel as though I should avoid swimming for about a fortnight.

The walk to and from the brasserie offered proof that spring is well and truly on its way, as the air filled my olfactory doings with, yes, scents of woodsmoke from those log-burning stoves of Frenchmen trying to keep warm in the face of another chilly night. But there were also sweet smells of flowers unknown and that rank musk of laurels blooming. New beech leaves shone like emeralds in the twilight. All was, in fact, well.

My alarm did proper things this morning and I rose in good time for a reasonably relaxed breakfast and a stop-start rush hour drive down to Pessac and my first tasting of the day.

One is greeted at La Mission Haut-Brion by a fleet of riding boot-wearing, well, totty, I s'pose they used to be called. In these days of political correctness they're probably referred to as greeting technicians or somesuch.

I was ushered into an extrordinary room, there to taste, very much at leisure, the red and white wines of La Mission and Haut-Brion. These are superb in both colours. The reds are very tannic, but credibly so. The whites: woooo. They're aromatic, crisp, concentrated; glittering.

From La Mission I headed off to Chateau Smith-Haut-Lafitte for the cross-country marathon that is the Pessac-Leognan and Graves tasting. I started with the reds, considering that the whites would send me on my way at the end of the tasting in rather more upb eat mood.

I was very pleasantly surprised. Okay, so some of the reds were devised by Madame Guillotine for the torture of miscreants. These have the sort of tannins with which one could crush rocks; tannins that make one's mouth feel as though a Sahara sandstorm has recently passed its way.

But there were a great many reds that were intense, stuctured, expressive and age-worthy.

And then there were the whites. Chateau after chateau presented the most beautiful liquids. It was, quite simply, a high point, with the white of Domaine de Chevalier being a towering, lingering note above a well-tuned orchestra. I left feeling chuffed.

Chuffedness continued, as I was off to Chateau d'Yquem. Very early, I thought I would give it a shot anyway and was welcomed into the tasting room with a party of visiting Czechs. A quick visit, with just the one wine to taste: a brilliant, massive, beautiful wine, fully nobly rotten and smelling like lime meringue pie. Heaven!

From Yquem, I used my satnav (and an old man on a tractor) to find Chateau Climens. The old man on the tractor pronounced the word in the local accent: clee-mens. He was, neverthless, more reliable than my TomTom.

The thing about Climens at this time of year is that they have made no effort to construct a final blend. It is for the taster to do so using his/her imagination. Thus we tasted 8 or so barrels. Each one was broached with its accompanying history. "This cuvee is from the second picking, from which 16 barrels were made. The picking occured on 21st October and this barrel was picked in the afternoon." You can tell it was picked in the afternoon, as the barrel bears the chalk marks "AM", rather confusingly denoting "Apres Manger".

What a wine! The barrels we tasted all had very differing characteristics, some more or less sweet, more of less concentrated, more of less leafy or citrus. I am sure that the end result will be fabulous; at least as fabulous as the 2006 and 2007 vintages with which vintages we ended the tasting.

And then I came back to the hotel and you know the rest: too much meaty salad and too much duck. I can feel sympathy radiating down the airwaves.