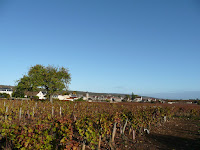 Vosne in the morning sun

I drove to Bristol airport yesterday afternoon in a haze of tiredness. For various reasons - largely child related - I had accumulated three partially sleepless nights and I had car windows open as I drove along the A420 towards Bristol. The road cuts high over the valley in which the city of Bath is cradled and I wondered whether I had perhaps fallen asleep when I noticed that the valley was full of bright silver mist. It looked as though a magnesium fire had overwhelmed Bath's Georgian archetecture.

A nondescript budget airline dropped me blandly into Geneva. What an odd airport. Straight on for Switzerland, turn left for France. I picked up my car on the French side and quibbled. I'd booked something VW Golf class and was offered a Vauxhall Meriva, a sort of mini MPV: a class of vehicle no one realised they needed until its maker foisted it on the world. So quibbled is what I did and have ended up with a Peugeot jeep thing, the designers of which appear to have been mixing alcohol with their anti-depressants. I cannot complain. It has a camera that shows the driver what's occurring behind the car when one is reversing and a hi-fi system that records one's CDs to hard driven upon insertion.

Beaune appeared in my windscreen some two-and-a quarter hours later and I didn't hang about. It was all they could do to stop me falling asleep leaning against the reception counter.

This morning dawned bright. I donned hat, gilet, thick jumper, but needed less. Late autumn is still dreaming of the more fructiferous season that preceded it and there is warmth yet in Burgundy's sun.

Today I have visited Jean Chauvenet, Rossignol-Trapet, Francois Lamarche, Louis Boillot and Benoit Germain (he should have a hat on the e of Benoit, but I cannot find out how to key it) at the Chateau (ditto the first a) de Chorey. What have I found?

September, with its fierce north wind, saved the vintage without doubt. Much fruit was lost during triage, that process of picking over the harvested fruit in order to identify and discard anything less than perfect. What was left has - from what I have seen today - produced some really lovely wines; wines with terroir aplenty, rich tannins and crisp, pure fruit.

I want to unleash something of a rant, but won't on this post. It relates to wine, the pleasure to be had from drinking it and the scores appended to these liquids by journalists who should know better. Keep and eye out for the offer. I intend to let rip.
Copyright © 2022 Bowes Wine Ltd  |  All Rights Reserved