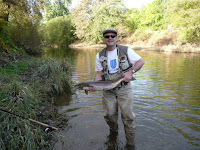 I travelled to Wales on Wednesday for a few hours of fishing the upper Wye. I have known this stretch of river for many years - since I was 16 or so - and it is where I started to learn to fly fish. It is also where I caught my first salmon.

I had been informed that there were some salmon in the pool where the River Ithon joins the main flow and, indeed, I hadn't been fishing too long before a fish took my fly and started to frolic about the water a bit. 10 seconds was as long as our relationship lasted. The fly worked loose and pinged over my head into an overhanging birch tree.

I stopped and had a sandwich and some cool beer. The place has an Eden (the biblical garden, not the cumbrian river) -like quality and in October's soft sunlight it was not far off its finest, the trees yellowing towards dormancy, a trout or two rising lazily to bushily hatching sedge flies.

I wandered down river, casting in a peaceful trance, interrupted only by the occasional trout lifting to snatch at my offering.

Encountering no more fish I returned to the junction pool, meeting a local friend. Having just left work, Steve was without his fishing gear and declined my offer of the rod for him to take a few casts. He made himself comfortable on the bank and I started down the pool once more.

This time I gave the fly some movement, stripping it slowly with my left hand and fifth or sixth cast provoked a strong take, the rod tip starting to bounce under the weight of a good salmon. It's deep here and the fish tend of fight doggedly, using depth rather than distance to attempt an escape.

In five minutes, she was tiring and we quickly unhooked her. I held her in the water, head upstream. Under my hands I could feel her strength returning opening my grasp, watching her drop into the black depths. In a month or so, she'll be on the redd, producing eggs that - if luck is on their side - will provide future generations of fish that, like her, will run this beautiful river.

Steve settled back on the bank, but not for long. Rod tip bouncing again. Again, I threw Steve the camera. This fish immediately made for the bank and I thought, for a moment, that we would land her and get her unhooked and back in the water within a half-minute. She reconsidered, turned and the fight was on, shorter this time. Soon another hen fish, coppering into her spawning colours, was released.

So, my last two salmon fishing days have garnered me 5 fish. By rights I should be fishless for a long time to come. (I sit here touching all the wood I can find.) What a fine end to the 2009 fishing vintage!
Copyright © 2022 Bowes Wine Ltd  |  All Rights Reserved