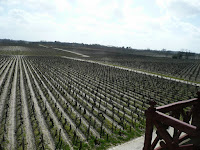 The view from the tasting room at Chateau Pontet-Canet


The storm which everyone had been predicting yesterday finally pulled up overhead as we were finishing up our dinner at La Tupina (a deeply south-west French, goose fat-and-haunch-of-badger-type restaurant in the old docks of Bordeaux) last evening and it hovered over Bordeaux until this morning, finally pushing off and leaving us with an afternoon of intermittent sunshine. Low-lying ground - at least that on clay soil - has been waterlogged and a new lake had appeared overnight in the fields south of St Julien.

I am now back in the hotel, footsore and feeling more than a little weary. (Do I have to keep pointing out that sympathy is not expected?!?) It's been a long day and we've tasted a great many wines.

The morning started at Chateau Grand-Puy-Lacoste and a private audience with M Borie the owner and his daughter Emilie. We tasted Lacoste Borie, GPL's second wine, as well as Haut-Batailley and GPL itself. It was then a quick flip to Batailley nearby and there we waded through the St Juliens, the Pauillacs and the St Estephes. Haut-Batailley, by the way, is a charmer. GPL more serious and pure and classically Pauillac.

As we left Batailley I found myself wondering whether my week wasn't going to be similar to that I spent in the region four years ago when I tasted the 2005 vintage; a week that threw up tasting after tasting that saw me placing tick after tick in my tasting book after each and every note, a plus sign indicating those wines I considered to be better yet than their exceptional neighbours on the trestle tables from which they were being served. I can honestly say that I didn't find a truly bad wine at Chateau Batailley this morning.

And I was starting to get a feel for the vintage. Utterly different from the 2005s, I couldn't help but think. The '09s are hugely tannic - more so even than the '05s - yet the tannins are ripe, velvet-textured, integrated, sophisticated. It's the fruit that sets it apart from the last of those harvests considered "great". This morning I was tasting wines that were charming, super-cool, pure and succulent. The drive to Chateau Desmirail (where we were to taste all the Margaux wines) found me humming a little tune and generally feeling that all was more-or-less right with the world. The stars of that first session, by the way, included Lynch-Bages, Pichon-Baron, Gruaud-Larose, Beychevelle, Branaire. I could go on.

And then reality, as is its wont, started nipping at my day. I must say that the Margaux tasting usually offers a dose of clarity and so it was here. Here a wine overloaded - almost untasteable - with oak. There a sample a touch green and astringent. The realisation that '09 was not a vintage without hiccup was dawning quick and fast. Yet there are great thinngs here, Rauzan-Segla, Brane-Cantenac, Cantenac-Brown, Monbrison, du Tertre and Giscours

We broke for a visit to Montrose, there tasting both a quite brilliant second wine and a Grand Vin that came across like the Lafite of St Estephe: pure, structured and with that attribute the best wines of '09s offer in spades: magical length.

We have been to Palmer (superb), we have sampled the Medocs, Haut-Medocs and Moulis wines (Poujeaux, Beaumont, La Tour Carnet, Lamarque, among others, standing head and shoulders above the crowd).

At this latter tasting, hosted at Cantemerle, a conversation ensued with another merchant, who pointed out that Pontet-Canet had been a star of his morning and it was only then that I remembered that it had been missing from the tasting at Batailley. We climbed into the car and drove back north, a round trip of well over an hour, to taste this one wine. And boy, I was glad we had. "Like a fine Riesling", one of my fellow tasters stated. And I could see what he meant. It was finely put together; scintillatingly bright and pure.

The tasting day finished with the Sauternes, this year shown at Chateau Dauzac in Margaux. And as with the tasting with which the day had started, this was a feast of ticking, almost every wine extraordinarily beautiful. De Myrat stood out for its fabulous streak of lipsmacking acidity, but there were so many, so many brilliant sweet wines. Rieussec, Lafaurie-Peyraguey, Suduiraut and, of course, Doisy-Daene are all worthy of mention.

So that's why I am now tired. I feel altogether deserving of the cold beer I am about to indulge in and the relaxed dinner that is to come!