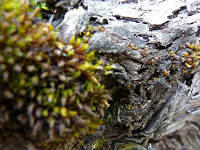 My working day started and ended in traffic. I drove south on the rocade - Bordeaux's ring road - towards the suburb of Pessac, leaving the hotel a little after 8am for my tasting at La Mission Haut Brion. Straight into the teeth of the rush hour I drove and it was slow going, albeit rather easier than the drive home from Barsac I have just undertaken: well over an hour of drab stop/start driving in pouring rain.

So, first stop La Mission, where changes have been afoot. Last year we leant that Bahans (the second wine of Haut Brion) had been rechristened and would thenceforth be known as the leonine sounding Clarence. This year Laville Haut Brion, La Mission's white wine had vanished, to be replaced by La Mission Blanc, which makes rather more sense as there is not and never has been a chateau called Laville. Plus Haut Brion Blanc now has a second wine by the name of Le Clarté de Haut Brion. "Clarté" means clarity. I had to ask.

The second wine of La Mission red - Chappelle de La Mission - was gorgeous: silken, pure, cool, with delightfully rich and tacky tannins already integrated with the fruit. Clarence, on the other hand, had his claws out and his mane was very bristly with super-dry tannin. I am reasonably certain that it'll end up as something rewarding, but I found it very hard to see beyond the austerity.

The Grands Vins were stunning. As is so often the case, I preferred La Mission at this stage. It is the more complex, the more mineral and, in '09, offers more fruit concentration. Haut Brion was dry, although the tannins were much more credible than those in the Clarence. A note of orange nuanced the plum and black cherry fruit.

The white wines here are outrageously good. Clarté is pungent, quite forward, pure and with a dusting of powdered minerals; La Mission Blanc is less aromatic (containing much less Sauvignon Blanc), but floral, rich, busy and complex, with a lick of grapefruit at the back; Haut Brion itself is scintillatingly lovely, a weal of super-rich fruit becoming more compact through the palate. Yellow apples followed hints of fennel and a smoky minerality.

A good visit, in other words.

Smith Haut Lafitte was my next stop, the property hosting the Union des Grands crus Pessac-Léognan and Graves tasting this year (as they so often seem to).

I started with the reds and quickly realised that a piece of bread between each pair of wines wouold make my job much easier. The tannins rapidly build up on one's palate and need something doughy to expunge them.

Whites next and what a relief to be out of the tannin zone for a while: so much easier to assess than their red brethren. Smith Haut Lafitte is superb, Malartic again and Latour Martillac; Fieuzal tasting much less exotic than usual, Carbonnieux excellent and in a style that really stood out from the crowd. But as last year and many other vintages besides, it was the white Domaine de Chevalier that left all others trailing in its wake. It is a very great wine in '09.

I swallowed a cold lunch, sat in the car for a bit going over my notes, examining my eyelids, killing time before my appointment at some off-beat chateau called Yquem. Off all Bordeaux chateaux, this is the one one least objects to visiting for the sake of tasting a single wine. The '09 is extraordinary; quite different to the '08, which had a beautiful lime-flower airiness and was exceedingly "come hither". The '09s is majestic, regal. I could smell cut ginger root before my host had even poured my sample. The '09 Yquem is simply dripping in botrytis, thick and dense in both aroma and fruit on the palate, complex, profound and utterly lovely. I gave it 7 badgers and a clog out of twenty (this is a new scoring system I have adopted; I am sure you'll soon get the hang of it).

Climens is a short drive away and whilst they, too, have but a single wine to market, the tasting is quite different. There the wine maker took me through numerous barrels. The first was filled with wine made from fruit picked on 3rd October, the second barrel, the 4th. The third barrel was picked in the morning of 5th, the fourth sample poured from a barrel containing the fruit of that afternoon's labours. And so it went on, seven barrels in all, each quite different from the other. And there is not one grain of doubt in my mind that, just as Yquem will be filed along with the great issuances of that property, so will the 2009 Climens. It was very much worth getting sticky hands for!

Hey ho. Tired again and flying solo today, my two fellow tasters having shipped themselves back to Blighty (the wife of one was experiencing the contractions of their third child the day he left, so I didn't begrudge him his defection!)

So, early to bed tonight now that I have no playmates. Big day in the Libourne tomorrow.