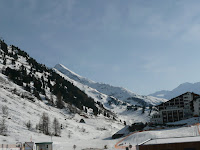 The sort of weather we had all week in Obergurgl

Two days after returning from Bordeaux we headed out, en famille, to Austria and the slopes of that country's highest skiing resort, Obergurgl.

Not being the scion of a skiing-obsessed family, I must confess to being an utter neophyte at this strangest of sports. The longer I did it, the odder the concept seemed: a sort of demented sliding for pleasure; most unnatural.

A quite brilliant instructor got me upright and improving and on the last afternoon we headed to Hochgurgl, Obergurgl's lofty twin, and the high, wide slopes to be found there. I relished the turns, the speed and, in more sensible moments, the control.

Joseph had started the week with a day-and-a-half of sickness, perhaps from the altitude. As we arrived in the departure gate at Innsbruck for the flight home, Isabella's turn had come. The clean-up operation was substantial...and she hadn't finished there. She was sick again on the 'plane and again as we waited for our car to be delivered to arrivals. Gladly, there was nothing left in the kitty for the drive home.

Spring has sprung! All sorts of things are being lusty in the garden and, two days ago, Victoria spotted that the mallard was in one of the flower beds with twelve ducklings. She (or one similar) nests every year under a cotoneaster on the front wall of the house.

Isabella was, of course, extremely excited by the beaky balls of fluff, so I took her out and together we guided the family down the long field to the canal. I am glad we did. The herd of young bullocks that populates that field and the one behind our house took much more interest in the ducklings than in either Isabella or me and I am reasonably certain that they would have stepped on a few had we not been there.

One of the ducklings paused a moment to chew on something that it repeatedly spat out before grabbing again in its tiny beak. Thinking better of its meal, it left the struggling form of a honey bee on a blade of grass, none the worse, it seemed, for its being masticated.

And we're tasting a great many wines for The Daily Drinker. I am finding it educational and enjoying it enormously. So many fabulous, characterful and unoaked white wines are there, made from slightly arcane grape varieties and utterly delicious. The more of them I taste, the more I realise just how much of a mistake it is to serve most white wines so cold!
Copyright © 2022 Bowes Wine Ltd  |  All Rights Reserved