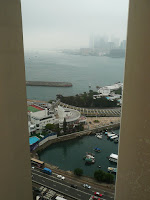 Not been out and about with my camera, so all I can offer is another - rather dour - view from my hotel window.

People have been telling me for some time what a good option New Zealand Air is to Hong Kong, so this time I took the plunge and booked my flight with them. They turned out to be cheaper than either BA or Virgin and their Premium Economy service not only has a great deal more legroom than either of those, they also offer Premium Economy fliers Business Class nosh. Not having seen Avatar, I plugged myself into the entertainment system and then dozed off, dreaming of large blue women.

Turnaround, once I reached my hotel, was rapid, as I had a dinner appointment, a rendezvous that introduced me to two new Hong Kong venues. We met at Sevva, the bar at the top of Prince's Building that has a large wooden balcony on which one can harbour-watch and smoke cigars. I sat drinking cold beer, puffing away on a Juan Lopez No.1 and feeling distinctly damp, as the air was like super-heated carrot and coriander soup, only less healthy. The humidity presses in on one; I find myself feeling almost claustrophobic in this atmosphere, as if on the point of drowning.

From Sevva, we took a short walk downstairs to the new Berry Brothers bistro in the Dunhill store in the same building. Having bars and restaurants in one's shop seems to be a phenomenon that is spreading; when last I was in Shanghai, I consumed one too many martinis in a similar establishment there.

The menu is where bistro food meets the British classic, thus fish and chips and cottage pie and steak and chips feature prominently. We both had bangers and mash, first sinking a bottle of Schiopetto Pinot Grigio (really pretty good) and then a glass of Cuvee Alexandre Can Sauv from the Chilean outfit Casa Lapostolle (okay). All-in-all a good welcome to Hong Kong sort of evening.

Yesterday, I sweated my way to the Hong Kong Club, in through their new entrance and downstairs to the membership desk. I am now a member of a London club that has a reciprocal arrangement here, so I stopped by to complete the relevant forms. I can now sip beer in the Members' Bar, slurp wine in the Bowling Alley Bar or enjoy tasty tucker in either the Red or Jackson Rooms. Hurrah!

I jumped on the MTR down to Sheung Wan for lunch at Gaia. This Italian eatery is something of a canteen to those who work in The Center (yes, American spelling, I am sorry to say): that large edifice that changes colour at night. Food here is really very satisfying. The buffet's the thing to go for as a starter. Conscious that I have a concentrated week of eating ahead of me, I opted for the pasta main course, which was very good, especially when pepped up with a squirt of Avery Island's finest.

Back at the hotel and a few emails under my belt, I hit the gym and paddled away on the rowing machine for half-an-hour, did some weights and headed back to my room feeling righteous.

Dinner last evening was a delicious affair with a client and his wife. Panavino on Robinson Road is also an Italian establishment and it's a very good one, too. I started with a plate of squid and prawns and the roast suckling pig main course was as good as I have had: moist, fatty and with a delicious fine layer of junior crackling over all.

And I have been sleeping well, just waking quite early and with the feeling that consciousness is returning at an inappropriate hour. Another couple of days and I'll be on Hong Kong time.

And I am writing this having just eaten breakfast. I cut my lip on my morning croissant. How many people can say that?!?
Copyright © 2022 Bowes Wine Ltd  |  All Rights Reserved