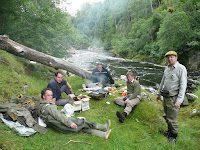 A merry, if slightly liverish, band by the black waters of the Findhorn

The dust has settled; the fallout, having attained its half-life, now outwith its span of toxicity. The mighty John Buchan Food and Wine Society has convened for its annual get-together in the midge-infested Far North…and we have emerged, largely unscathed.

Now in its fifth year (if memory serves me well, which quite possibly it doesn't), the JBFWS was created to encourage a small band of similarly-minded individuals to slope off to a damp environment near a river (to date, the Tweed, 2010 being the first vintage in its new environment in the midge-infested…etc.), there to consume what might be considered by some to be indecent amounts of exceptionally fine food and wine and punctuate those meals by fly fishing for salmon.

To date we have been but four members. They are:

H - Part owner of a chain of London restaurants; chef of exceptionally lofty calibre; described by his own doctor as clinically obese (much to his amusement), yet not averse to divesting himself of all clothing should he believe a post-prandial skinny-dip to be in order

X - The Bringer of Good Humour and perpetual breeder, this latter characteristic interfering more than once with his participation in the JBFWS

C - Your humble servant; mate of Bacchus and rabidly keen fisherman, although lacking the sort of finesse and skill that makes L so depressingly and regularly successful a man-in-waders

So. 2010. A change in venue. Society members this year headed to the River Findhorn, a magical waterway east of Inverness and a veritable motorway for our scaly, anadromous targets.

And with 2010 came an expansion of membership. Three new members joined us:

A - Inhabitor of vast stately Scottish pile; extremely able fisherman; general bon viveur and possessor of the most infectious laugh, in which state giving the impression of an over-pressure steam engine being slowly crushed under some vast weight

Where to start but with our arrival in this curiously blasted yet supremely vital landscape that manages to feel both homely and entirely alien and remote at the same time?

The March Stream - the most productive section of the beat - was looking in fine form when we pulled up. The naturally black water of the Findhorn streamed in lively fashion between its rocky banks and L confirmed that it was running quite high.

Glasses appeared and we saluted the water with a bottle of Macon-Charnay before I cut to the chase and pulled the cork on a 2004 Chablis 1er Cru Fourchaume from William Fèvre. We offered this wine at the time of the 2004 vintage releases and it is now powering along, much like the river flowing so darkly below us. Purity and a profound minerality are the watchwords here. Lip-smacking and crystalline. Lovely.

We stay, when fishing the Findhorn, in Dunearn Lodge, a large squat Victorian edifice on the moors. (I should explain that I have fished this beat of the Findhorn several times before. 2010 is simply the vintage in which the JBFWS moved here.)

The lodge is sufficiently large to offer 12 or more fishermen/golfers the opportunity of getting a night's rest after an exhausting day on the river bank/fairway and with large dining and drawing rooms it provides heightened degrees of comfort.

The rest of the crew assembled in short order. More wine was broached and H started to work his magic stove-side.

Now, to the food. R's large black pigs had provided a surplus of superb comestibles, bless them, including a great tranche of air dried ham. R has been experimenting with making the stuff and the evidence of my taste buds, over which were passing what would logically be assumed to be extremely fine parma ham, suggested that he has arrived at the perfect modus operandi.

R's large blacks also supplied Bath Chaps, an arcane dish now making something of a minor comeback, especially in that eponymous city. A Bath Chap is a rolled pig's face. H set to work and boiled the thing for four hours before pressing it overnight in the fridge. Sliced and barbecued on the river bank the next day, we basked in the intake of an extraordinary amount of the most delicious pork fat; fat that accounted for roughly 70% of each slice. Fabulous.

The pigs also lent us their ears: hideous large triangles of waxy skin hiding a lightly crunchy membrane: not what Shakespeare had in mind at all, I'd warrant. They were breaded and fried and put in an appearance in a salad (many of us were desperate for green leaves on the third day). They didn't do it for me, I must say, but then it had been me that had had a close encounter with them in their raw state earlier in the day, when I sliced the things into strips.

H had brought morels. Macaroni cheese made with these fungi was a quite ambrosial accompaniment to a fine steak on our first evening.

And mushrooms figured elsewhere, as the woods around the river and our lodge were populated by small drifts of chanterelles and ceps. Over the former H waved his wand and dished them out with exquisitely cooked grouse from A's estate. I don't eat enough grouse, I decided, as another pinkly soft mouthful slid between my teeth.

Dinner on day two. For the first time on a John Buchan Soc convivium we had struck a rich seam of salmon. The river was teeming with the things, although that's not to say that they were especially easy to fool. Yet by day two, we had a brace of grilse in the fridge (with several others released, I might add). These small salmon are the sweetest to eat fresh and H spent a long hour hunched like a sushi master, slicing two sides into the finest slivers, destined for ceviche.

This was one of the many culinary high-points of the trip. "Cooked" in lemon juice for just 20 minutes, combined with thinly sliced fennel and laid on a bed of avocado, this was utterly lovely.

Barbecued lamb's breast was fatty, crispy-skinned and more-ish in the extreme. H took time out to flop a fly into the water from the pulpit-like rock where we had set up our lunchtime arrangements and lo! He pulled out a 10lb salmon: his first.

I have not even mentioned the breakfasts of R's sausages and bacon, liberally lubricated with eggs. Breakfast was a necessary daily fortification for the hard fishing to come.

And then the wines. In no particular order, we did away with luminary bottles.

2001 Pavillon Blanc de Château Margaux: a clean, complex and citrus mouthful and a wine that one would be hard pressed to put as 100% Sauvignon Blanc were one to be given it blind.

1995 Batailley: an honest, chunky claret of the old school and deeply satisfying for all that.

2001 Orneillaia, served alongside 1995 Tignanello, the former rich, oaky, perhaps showing more of its fleshy Merlot than a 30% share would suggest. The Tignanello more Olde Worlde, more savoury and structured.

1997 Hermitage La Chapelle: just coming into its window of drinkability. Not a big wine, for sure, but regal in its way, full of spice and the blackest fruits.

1996 Château Monbrison - another Margaux and a delightful one. Structured and elegant.

1999 Châteauneuf-du-Pape Blanc, Château de Beaucastel. This wine has become something of an institution for the JBFWS, as I have brought one along the last three years. Boy, this is good stuff: very, very rich and offering a fascinating panoply of aromas and flavours, from orange and peach to liquorice and fennel. Amazing stuff.

I have omitted many excellent bottles and a number of foodie highlights, but the riches culinary and vinous are becoming embarrassing! Much as we all would have loved to stay longer, one finds that one's constitution starts to falter in the face of quite so much loveliness; one's taste buds begin to creak under the weight of such experience, and one's spleen becomes anxious to leave the building.