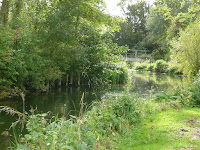 The River Test at Wherwell where trout run big


I am lucky to have fished the River Test twice in the last month or so, in the first instance at Broadlands, where the lower river is broad and, on our visit, brightly sparkling under clear skies and bright, late summer sunlight.

These are tricky conditions in which to attempt to fool a fish. A wayward shadow, a hint of a splashy cast and the fish get the message straightaway: keep your head down and ignore anything that floats past, even if it does look like food.

Fish were caught; not many, but some. And a salmon was spotted lurking under the bank. At one time this was a noted salmon fishery. No longer, alas.

And by very kind invitation from a Daily Drinker member, I visited Wherwell last Thursday. Much of my hour's journey was undertaken in heavy rain. Then, two miles from my destination the precipitation became something else, something that made me realise that I would have to readjust my definition of the word "heavy".

But it soon stopped and we ventured forth. I like this kind of fishing: flicking a fly through letter-box-like openings in bushes; creeping hither and yon on one's knees like demented invaders.

And there were fish. Lots of fish. Fish that seemed perpetually hungry, that didn't come off the fin all day. And we caught fish all day, almost all returned, although I took my last - a 2.5lb cock fish that was lying under a bridge and that came instantly to my fly, thereafter fighting like one who knows they have been deceived and are all the angrier for it - for the table.

Not much left of the season now. Conditions have turned, all of a sudden. The autumn cold permeates the house and makes me think of the log-man and that I had better place a telephone order soon. Spiders are inveigling their way indoors. Mice tap-dance in the roof at night and the first batch of autumn colds have arrived.
We saw Joanna Newsom in Bristol a couple of weeks ago. I know I have mentioned her before and I know that some people just don't get the addiction of her fans, but I was in sheer heaven. Long may she run!

And now putting the finishing touches to the list of wines we're to show at the Vintners' Hall on 1st November. It should prove to be the best Bowes Wine London tasting ever!
Copyright © 2022 Bowes Wine Ltd  |  All Rights Reserved