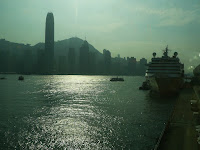 The view back to Sheung Wan from Ocean Terminal in Tsim Sha Tsoi, the mighty finger of IFC2 picking at the sky

Weather continues good in Hong Kong, a contrast, I believe, to what is occurring in the UK, where subzero termpatures and, today, snow, hold sway.

I am enjoying using the facilities of the Hong Kong Club. Membership of a London club gives me reciprocal rights and, having signed a chit on arrival I can bask in this venerable institution's exemplary F&B.

The Hong Kong Club is currently running a promotion of 2002 red Bordeaux and I am struggling to get past the Rauzan-Segla at $420 a bottle. It's a drink that makes one wonder why the wine collectors of the world chase power and intense concentration. In my view, much more reward is to be had in the consumption of liquids elegant, balanced, subtle and beautiful.

I had brunch at Zuma the other day: an excellent feed indeed, the atmosphere lightened by diners' children whooping about between the tables. From there, back to an appartment in mid levels for cigars on the balcony. The wine accompaniment a 2006 Oregon Pinot Noir in the first instance (I must ask to be reminded of the name as it was extremely tasty) and 2000 Chateau Pavie-Macquin in the second. This St Emilion has softened delightfully, the tannins liquidised, the fruit fresh and lovely, utterly lacking the dried fruit dullness that sometimes characterises the produce of those obsessed with ultra-late picking in this sometimes frustrating commune.

Dinner later on in the Red Room of the HK Club and a bottle of 2007 white Puligny was followed by a delicious 2007 red Chassagne from Morey-Coffinet: surprisingly dark fruited, crisp and nicely open-hearted. I do like the better red wines from those white wine producing communes of the Cote de Beaune...but just try selling them!

Lunch at L'Atelier de Joel Robuchon. First visit here. Wow, the food was good. I have subsequently heard mixed reviews of this place, but I can only report that our meal was beyond good; really exciting (and it takes quite a bit to get me excited about food). To drink, a wine I have been wanting to try for some years: the mighty (if Parker's to be believed) Numanthia, a senior wine of the Toro DO in northern Spain. There were several vintages on the (extensive, eclectic) wine list and I plumped for the 1999. Here's the note:

N.B. I guess this is, if not 100% Tempranillo (here called Tinto de Toro), then pretty nearly. Almost opaque in the glass. The aromas are mature, taking in smoky cinders, liquorice root and ground coriander, ground ginger. Fruit is black and pretty broad, perhaps a little fudgy. Later, I found what I could only describe as chilli powder and something medicinal. The palate is mature and cake-y, with mild minerals and juicy grip. Very long, the tannins have the texture of flour. Finish is out of sight. Interesting, complex bottle of wine.

Tastings is an interesting wine bar off Wellington Street. One wall of the place is lined with Enomatic machines. One buys credit that is electronically installed onto a credit card and then helps oneself from an array of interesting bottles by inserting the card into the machine and selecting a measure: sample, half glass, full glass. Wines on offer (and there are about 25 of them) range from Old and New World Pinot Noirs right up to Grange and 1995 Mouton-Rothschild. We nibbled Pata Negro ham and some cheese whilst sampling a line-up of palate teasers: all good fun.

And then the night before last was the Bowes Wine Hong Kong tasting at the Yacht Club. In the end about 60 tasters turned up and sampled 24 wines in a very relaxed sort of way, more drinks party than serious exercise in vinous investigation. But there was a great range of liquids open for sampling, from Austrian and Rhone whites to a look at a flight of 2007 burgundies red and white, a flurry of Italian reds and a trio of 2006 Bordeaux to finish: Leoville-Lascases, Troplong-Mondot and Coutet. Everyone seemed very pleased with what they were tasting and the evening in general, even the chap whose red wine ended up down his short front, aided and abetted by my elbow.

I am off to Discovery Bay this evening and I am rather looking forward to the slowness of pace over there, if only for the evening. I'll be back there on Saturday for the afternoon. A report will be forthcoming.