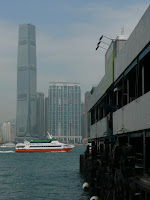 The newly finished ICC, in the top of which will be housed the new Ritz Carlton, towers above expensive residential blocks in Kowloon


I dropped into Heathrow yesterday morning anticipating a nip in the air and I wasn't disappointed. And the further west I drove, the whiter was the landscape, which surprised me, as the news I had received was the the east of the country had been worst hit.

My last few days in Hong Kong were beset with fine wines. I travelled to Discovery Bay for dinner one evening and was spoiled rotten. The client whom I was visiting presented me with a glass of 2000 Corton-Charlemagne Bonneau de Martray on arrival, held up another bottle and asked whether it should be decanted. I scanned the label. Hmm. 1990 Cheval-Blanc. Let's decant it, said I!

2000 Corton-Charlemagne, Bonneau de Martray
A strong, pale, healthy lemon colour. Initially, this is very broad on the nose; diffuse, almost a little oxidised. With air, it fined up noticeably. A citrus marmalade of rich fruit. Smoky: a touch of gunflint, plus hints of nut. The palate is fresh from the front and highly concentrated, with great shape to it. Some earthy minerals clothe the long finish. This becomes much more focused with air. Lemon grip at the back. Touch of something exotic still.

We sat on the balcony and the client's son presented a coarse paté made from a smoked side of king salmon that he had recently caught in Alaska. It was utterly delicious and went very well with the wine!

The Cheval-Blanc decanted, we poured glasses of red burgundy as we sat in the cool air of evening, the lights of Discovery Bay below us. 2002 Clos Vougeot from Jean Grivot is wearing the clothes of a teenager, but a very well-dressed one!
Pale-mid garnet-ruby. The nose is fresh and ever changing, of black and red fruits. smoky black cherries, plus a savoury hint of dark chocolate. Hints, too, of red apple, rosehip and sweet spice. In the mouth this is instantly fresh, with some upright tannins that start early on. A piquant, smoky wine, grippy and very long indeed. There's an earthiness to the texture at the finish. With air, this becomes crisper seeming. Smoked meat and sweet spice.

The client's son presented a fabulous main course of veal chops and we poured out the Cheval-Blanc and it was another wine the bouquet of which changed every time I went back to it:
A medium-deep mahogany bowl, with a narrow bricky-gold band at the rim. Aromas are fresh, of red and black fruits, that note of pencil shavings, plus fresh mushroom skins. Smoky, black cherry fruit and some sweet spice. Slaty and crisp nose. Palate is cool and medium weight; crisp, with some mild, upright, totally integrated tannins. A firm core and a complete wine, with a great, cool shape to it. Very, very long. Later, dry spice and dried meat. Floral hints of roses and other summer flowers. Plush-but-firm and very long.

Two days later I was back on the ferry to DB, for lunch this time and lunch at a client's house that has seen me disgrace myself on more than one occasion in the past. Alas, I managed to disgrace myself once more. Blind tasting is the problem.

What is it with some locations that render one's palate so utterly ineffective? First blind wine and at least was talking about the right grape variety - Chardonnay - and the Antipodes, although I was hovering over NZ and should have been in Western Australia. Second wine and I was still in the Antipodes, when I should have been in Chassagne, third and fourth wines - the reds - I was far, far worse, my crowning glory being the mistaking of a claret (1990 Château Batailley) for a northern Rhône wine. My tail was so far between my legs that it might as well have been docked at birth.

Alfie's is a new restaurant in prince's Building in Central and is situated within a Prada outlet. There seems to be something of a trend for this sort of symbiosis, as the Prada shop in Plaza 66 in Shanghai also has a bar and restaurant and in both instances the eateries are operated by the Kee Club.

In the case of Alfie's, the restaurant is right next to a Berry Brothers wine shop and one can browse the shelves, select a bottle or two, and have them sent to one's table.

Burgundy was evidently uppermost in our minds the other evening for we selected a bottle of 2000 Gevrey-Chambertin Clos St Jacques Louis Jadot and a 2003 Clos St Denis of Nicolas Potel. I had drunk the Gevrey the previous week, which was why I suggested it on this occasion. It is complex, crisp, pure and delicious. And there is no hurry to consume it, as from the evidence of these bottles I would say that it has years of life remaining. The Clos St Denis was also delicious and lacking almost all signs of the torrefaction that can be a dominant characteristic of the vintage, just a hint of dried fruit appearing with aeration.

So. I am now back. And I am tired. But I am happy to be home with my family, and happy with the memories of jolly meetings and of the many extremely kind and generous people I have encountered during my travels. Thank you one and all.
Copyright © 2022 Bowes Wine Ltd  |  All Rights Reserved