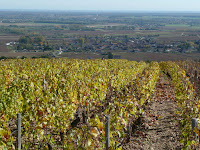 Somewhere in the Côte d'Or, October 2010

It's tasting season in the UK at the moment: a great time of year to rail against the injustices propagated by these events, none more so than the myriad primeur burgundy tastings. It becomes increasingly evident that clear and proper evaluation cannot be made in a room full of barrel samples in London. Different producers wines are tasted in a rapid-fire display of sucking and spitting, any context is lost, certain domaine's styles making no sense in a sea of stylistic variety, being marked down as a result. And these are the notes being cross-referenced by the consumer before he or she makes his or her buyuing decisions. Oh dear. Increasingly, I am certain that the only way to properly evaluate (split infinitives now permissable, I am told) a producer's wines is to do it in his or her cellar. Anything else is just irresponsible.

On a happier note, we have been tasting a great range of interesting wines for The Daily Drinker. Most recently (last evening, in fact!), I opened a wine made from a grape about which I can find very little information, the gen I have garnered thus far serving only to confuse me even more. It was a Langhe Bianco; so far so hoopy (as, I believe, Charlie Brown used to comment). But the variety is Rossese and the first thing Wikipedia tells me is that this is a red grape, whereas the wine in my glass was plainly a very bianco Langhe indeed.

The internet goes on to reveal that Rossese is a synonym of Vermentino; that it is also synonymous with a number of varieties having both the words bianco and Nero/Rossa in their titles. I am pretty sure that it is something called Rossese Bianco, however. And since the producer's website is full of photographs of assorted humans dressed up as gnomes and includes the history - complete with Christian names - of the gnomic (gnomish?) population residing in and around their vineyards, I am not confident that I will learn anything there either. Anyway, the price is toppy for The Daily Drinker, but it is such a superb white, I think I can only select it.

It's not all swings, however. There was something of a major roundabout earlier in the day in the shape of a bottle of Primitivo (for some years on/off synonymous with Zinfandel, now more offish than onnish). Nose rather muted, the desire to cough evidence of a splash of sulphur dioxide in the wine; palate grubby, a lesson in asperity (my New Word of yesterday). Yuk.

And I cooked lamb's sweetbreads the other evening for the first time, a recipe from that superb chef-of chefs, Simon Hopkinson. Braised lettuce hearts, garlic, bacon and asparagus (grudgingly bought, as it's all from Peru at this time of year). The sweetbreads themselves trimmed, seasoned, floured and fried to golden perfection in butter. The perfect mid-week meal and excellent with 2003 Santenay 1er Cru Les Maladières of Domaine Lucien Muzard, offer by Bowes Wine some years ago and now drinking fabulously well.

Planning a trip to the Rhône at the beginning of March and oh, is that Bordeaux en primeur raising its head once again? Already?!? No rest for a wicked wine merchant!
Copyright © 2022 Bowes Wine Ltd  |  All Rights Reserved