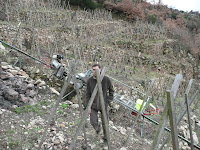 We arrived in Beaune at 19h15 or so last evening after a drive that included an irritating betrayal by my SatNav. Some distance south of Calais I remarked to Tasting Buddy that I thought our present route was taking in sights not included in previous road trips to Burgundy and, indeed, a short time thereafter we started seeing signs to Paris...then Charles de Gaulle airport. And shortly after that, we found ourselves in stationary traffic somewhere near the centre of the French capital. A period of stress followed.

Fortunately the French attitude towards cities is to keep 'em small and it was perhaps only 40 minutes before we were ejected from Paris's south-eastern limits and we were able to continue our rapid progress Beaune-ward. (Interestingly, this morning I plugged Calais into this backstabbing machine and it relayed the information that it considered the journey from Beaune to the Chunnel to be five hours and thirteen minutes. I then stipulated that I wanted to go via Reims (i.e. avoiding Paris altogether). Its new estimate? Five hours and fourteen minutes. It seems that for the sake of a single minute the SatNav had decided that urban traffic jams necessary.)

Beaune was merely a useful stopping off point to break up our journey to the Rhone, so it was an early rise this morning for a dash south and a rendezvous at the Domaine Rene Rostaing, a dash that left us just enough time to grab a coffee and a croissant at a cafe in Ampuis before our first tasting.

I hadn't been to Rostaing before, although I have some experience of his extraordinary wines. M Rostaing is a wiry man with neat white hair and he has distinct opinions as to how to make the best from Cote-Rotie fruit. And that's exactgly what he does. His wines are clean and graceful; intense and - especially in the case of the Cote Blonde - really rather beautiful. It was a rewarding start to Day One.

A short drive took us to the domaine of Giles Barge and it was the man himself who ushered us into a parking spot. His son Julien appeared and together we tasted the 2009 vintage. We started with their cuvee of St Joseph and quickly moved on to the Cote Rotie Cuvee du Plessy, a wine of which we have offered several vintages in the past. And it's a doozy in '09. Sampling a number of different barrels of this wine it quickly became apparent that Barge has met with brilliant success in the vintage. These are utterly different to Rostaing's wines. They are more feral, perhaps more traditional; complex and exciting.

Giles talked animatedly about their new project: the Combard vineyard that they have slowly brought back from a thoroughly overgrown state. The Roman terraces has been annexed by the neighbouring forest and the clearance included the cutting down of sizeable trees. M Barge mentioned a mono-rail - the only one in Cote-Rotie - and I had visions of a Disney-style ride high above the River Rhone. An invitation did, indeed, have us riding high above the river, but with Julien on a sewing machine sized diesel engine, towing Tasting Buddy and me in a shallow wire basket up a slope that, at times, seemed to be on the cusp of becoming entirely vertical. Sitting, as I was, with my back to the slope for the upward journey, I had to wedge myself in place with locked thighs to prevent myself from dropping out of my seat onto Tasting Buddy's face thereafter to roll at high speed down to our point of origin, some hundred yards downslope. Thus by the time we climbed out of our basket at some altitude, my legs had been rendered entirely wobbly which, I found out, was not the ideal condition for legs expected to anchor one securely to an ancient and uneven Roman terrace. We sapped places for the descent.

We hurried south and lunch in Tournon, the twin of Tain l'Hermitage across the river: a vast salad followed by vastly salty and delicious pork. No time to pause! we eschewed coffee and sped off to Mercurol to taste with Philippe Desmeures, owner of the Domaine des Remizieres. We launched ourselves into a sampling session that included the 2008 and 2009 vintages and both re and white wines. There are a great many brilliant wines here and we will offer them happily.

Now installed in our hotel in Orange and about to head into Avignon for a (hopefully modest) nibble. Beaucastel at 09h00 tomorrow sharp, so need to be well rested!