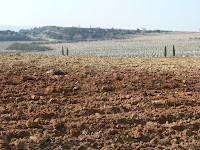 Two green rabbits, one saying to the other, "Have they gone? Is it safe to come out?"

We drove into Avignon last evening for a beer with an old work mate of mine who is now in the pay of the UK's Chateau de Beaucastel importer. On the edge of town, in skies brightly illuminated by a sunset of orange and gold, a flock - the biggest I have ever seen, hundreds of thousands, perhaps a million strong - of starlings performing their extraordinarily well coordinated manoevers. Alas, we couldn't stop, but craned our necks. We were both staggered by the sight, feeling privileged to be party to this airborn dance.

We parked under the Palais des Papes and it was good to see the square again after a space of some years.

Returning to Orange, we paced the streets looking for a restaurant in which to eat, finally plumping for a place called Bec Fin, a French nickname for the woodcock, a bird of which I (and the French for that matter) am extremely fond. It was utterly miserable, outclassed by any number of school dinners I have the misfortune to remember. Drab, badly thought-out food in ever more tasteless platefuls. Even the wine was execrable. A meal time in the Rhone wasted, alas.

A waste that we more than made up for today. We rose at a civilised time, our first appointment being at Beaucastel barely 10 minutes from the hotel and scheduled for 9 o'clock. The '09s here are deep and intense, the whites unctuous and highly mineral liquids fit for a pleasure dome. Yet it was the '08s that really impressed, as I hadn't been expecting anything like the brilliance they were showing: cool, focussed, elegant and chocker with terroir. It seems that, as in Burgundy, 1999 has thrown up wines fit for the sybarites amongst us, whilst the 2008s offer something perhaps more coolly cerebral. Personally, I like both!

From Beaucastel we made our way to St Prefert. Isabel Ferrando was looking quietly pleased and gently confident. Her wines explained why. She has changed her style somewhat, now including the grape stems during crushing and fermentation. The wines are just as scintillating, yet perhaps fresher, more elegant. All cuvees were stunningly good, including the 2008 Auguste Favier (no Charles Giraud that vintage).

Our appointment at Clos des Papes had been cancelled, Vincent Avril having suffered a bereavement in the family: a double blow after the recent death of his father. Thus we found ourself with time on our hands and the determination to have a really good lunch. Perhaps such a thing would sweep away the sour memories of the last night's poor fare. We headed north to the small town of Mondragon and the restaurant that adherres it firmly to the foodies' map of the region: the mighty Beaugraviere.

And we didn't mess about. We both ordered the truffle menu and what indecent decadence followed. I started with heavily truffled scrambled eggs and sighed my way into a plate of equally tuberose beef cheek for a main course. Tasting Buddy had duck terrine and veal sweetbreads. We were both presented with a slab of the local brie, cut through with truffle like the icing through a child's birthday cake. And then they brought us pudding. And those little sweet things that magically appear just when one has decided that not a crumb more should pass one's lips for the next, oh, year-and-a-bit. The wine that accompanied our early courses couldn't have been finer: 1998 Cornas from Clape, a spicy, hugely complex red and utterly delicious. The wine list here is tome-like, spiced with exciting goodies and thoroughly reasonably priced.

We visited Giraud in the afternoon, Marie Giraud looking as tickled as Isabel Ferrando and for the same reasons. Her '09s stopped us dead in our tracks. Amazing stuff here and, once again, a magical 2008 followed. Why must the journalists do their level best to put people off buying these vintages? I really cannot understand it.

Last up and completely new to me was a visit to Domaine de Villeneuve and a meeting with its owner, Stanislas Wallut. Stan is a music loving wine making obsessive. He is straining every sinew to work his vineyards in the most sympathetic way possible, working a hectare of land with a horse for five days, rather than using a tractor, compacting the soil, and covering 3 hectares in a single day. His wines are very exciting and I will buy some if I can.

What were we doing for dinner, we were asked. We admitted the shame of our vast lunch and mentioned that we were very much hoping to keep our evening meal to a course or so, preferably something small and green. But we simply had to go along with Stan's recommendation, a visit to a friend of his who owns a place called Alonso in Sorgues, some 5 miles from Chateauneuf. And what a place; what food and wine! We of course had to have the four courses, many polkadotted with telltale black scraps of truffle. One does not choose here. One series of dishes for every diner. Yet in that beautiful room we had an exemplary meal and a beautiful bottle of 2008 Bandol Blanc from the Domaine Saint Anne.

We did a brief calculation and decided that it was well possible that we both may have ingested something over 5,000 calories today. We decided that we really didn't care and that return to Blighty would be return to the strictest of regimen. Or something. The memory of that particular bit of the conversation dims even now and may well be gone altogether in the morning...
Copyright © 2022 Bowes Wine Ltd  |  All Rights Reserved