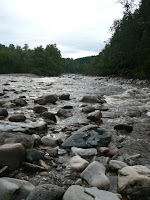 
I was in the north of Scotland last week on a boys' fishing sojourn, probing the dampness between the Findhorn's banks for the salmon that made no effort to hide their presence, sloshing, porpoising and jumping as they so frequently did. Looked after by a pair of tolerant young girls who cooked us high-protein meals at the top and bottom of the day and thereafter cleaned up after us, we ate and drank extremely well and fished hard: two hours before breakfast, then out again, halting only for barbecue lunch at the river's edge and the occasional cigar (actually, it is possible to fish down a pool smoking a cigar, but one has to hold it in one's mouth when casting and then either hold one's breath or inhale a great deal of fuming Havana up one's nose).

Everyone caught. Just not me. Come the final day, I had a "moment", standing in the water, slumped in my waders, utterly taken by despair. Half a day on the Tweed on the way up, four-and-a-half days on the Findhorn once there and all I'd had was three fish on and off again, with one or two other pulls, tweaks, blips or tugs, and that on favourable water with fish present.

Admittedly, no one found the fish that responsive. Yet everyone caught...except me. I have been forced into becoming rather philosophical...

We lunched with a client yesterday, a client who very kindly brought along a bottle of mature claret: 1990 Chateau Lascombes. I'd already opened and decanted a 2004 Domaine de Chevalier. Thinking a modest glass of white might be in order in the run up to being seated at table, I heaved the cork from a bottle of 2003 Clos des Papes Blanc. It's not a wine for everyone and wasn't 100% the client's cup of rose oolong, so I opened a 2006 Meursault: the Perrières from Boyer-Martenot. Here are some notes:

2004 Domaine de Chevalier, Pessac-Léognan
Almost opaque. For some time after opening, the aromatics are really pretty suppressed. After a couple of hours, classic gravelly, mocha aromas started emerging with rather more gusto, to combine with blackcurrant and spiced black cherry fruit. I also found hints of dark chocolate wood, biscuit, tomato and charcoal. There are also notes of ink and cedar. Altogether cool and highly complex already. The palate is very, very cool, very elegant, of sloe and blackcurrant. Both concentrated and extremely mineral, this shows a little, quite grippy and peppery tannin. Very long wine. Fresh and very pretty; very proper. And a style I very much like.

1990 Château Lascombes, Margaux
Deep mahogany bowl with a gold cast to the rim. The nose is really very smoky, the smoke laid over piquant red fruits. Aromas of dried herbs and a hint of orange came out later on. Palate is fresh, with a hint of those herbs again. Nice length and this gains in size and intensity. It also opened up steadily for two hours at least. There is grip here. A cool wine and a long one. A touch mineral. Fabulous finish. Complex and very good.

The 2003 Clos des Papes white is an amazing thing: pale in colour, still seeming quite secondary, with no hint of funky nuttiness or lanolin. Lime pastilles, yes and a myriad other fruits. This still has a remarkable future ahead of it. It is very much best served pretty warm: 18 degrees or so.

The 2006 Meursault 1er Cru Les Perrières from Boyer-Martenot does suffer from a degree of bottle variation. Some seem overly young, some spot on, the odd one flat and dull. How irksome! The one I opened yesterday was utterly tickety-boo: nutty; ready; hint of lime flower, then very mineral.