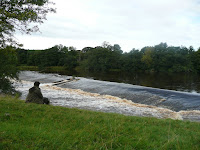 Watching rising waters pouring over the weir at Chollerford


I have been intending to pen a post for some time, but have found the path to the blogosphere paved with distractions.

We recently helped in the organisation and hosting of a wine tasting at Vintners Hall in London for a fantastic charity of which my brother-in-law is chairman: EMpower, an organisation that seeks to turn around the lives of children growing up in the emerging markets, giving them the opportunity to lead productive lives, thereby contributing to the communities from which they come.

And believe me when I say that it did take quite some organisation! Jonathan (the b-in-l) first called me to discuss such an event pretty much a year ago, shortly afterwards suggesting that the evening take the form of a tasting of wines from the BRICS countries. I must have been in an especially chipper mood that day, as I agreed. What an excellent idea!

Well, the reality was rather trickier than the agreeing. Prising wine out of a Russian winery proved to be exceptionally hard, local laws stipulating thaht no more than five bottles of samples of any one wine can be shipped in a single shipment. DHL were scratching their heads; we were simply pulling the hair from ours (and those who know me will understand that I do not have that many left to pull).

We had managed to land the tasting in a small window in the exceptionally hectic diary of Jancis Robinson, who very kindly agreed to come along and be our guest of honour.

As it turned out, it was a fabulous event: 160-or-so people assembled for a blind tasting of the BRICS wines, followed by an "open" tasting of a range of Daily Drinker bottles.

We had offered up a couple of Daily Drinker memberships as prizes for the blind part of the tasting, assuming that someone would (whether by luck or judgement) manage to guess the origins of all five pairs of wines (grouped together in couples, one red, one white). And no one did. Not a single person. When sheets had been marked, the details of those who had come closest were dropped into a "hat" and two names were duly pulled by Jancis.

Jancis gave a very well-received speech decorated with anecdotes about her time as a wine writer and a very jolly time was had by all. Jancis's write-up of the event can be viewed here.

I had intended to stay the night in one of the Vintners' bedrooms, but the call of the John Buchan Food and Wine Society was too strong. I had spat assiduously all evening and the moment the Hall was clear, I hopped into my car and, fuelled by regular doses of high octane energy drinks, made it to our lodging in Northumberland at 02h50.

I should explain. By a supremely shoddy piece of organisation on my part, I had managed to merge the dates for the second evening of the JBFWS with the BRICS tasting. By the time I arrived, the three regulars had enjoyed two evenings of Henry's extraordinary cooking and, if not an ocean, then a sizeable sea of fine wine. Luke had even caught a 17lb salmon. Clearly, I was playing catch-up on a montrous scale.

I cannot remember eating breakfast the next morning, but we were happily met and proceeded to the banks of the North Tyne reasonably sharpish. The water was in fine fettle: high and dark (dark being the Tyne's usual state), but clear and distinctly fishy looking.

Two fish I lost one in the morning, one shortly after lunch. The second was met with a reaction bordering on despair. I heaved myself heavily from the water and went to find sympathy from the rest of the crew. What I found instead was a wide-eyed Luke standing on the bank with a 20lb salmon at his feet. Very kindly, he suggested that I slip into the water just where he'd left off. I didn't need a second asking...

It was but 10 minutes thereafter that my fly stopped and a raising of the rod to lift the fly from the rock I thought perhaps had intercepted it was met with the crazed run of what turned out to be a 15lb fish. It was a spirited fight. At one stage, she flew upstream towards me and, reeling hard, I was sure for a moment that she was off.

Henry confited a part of the fillet that evening and it was absolutely spectacular. Hand-chopped steak tartare was also scintillating and we poured 1982 Lynch-Bages after it (pure, resolved, with mild, silk-like tannin and beautiful blackcurrant flavour), as well as the 2002 Vosne Brûlées from the defunct Domaine René Engel (soft, airy, elegant), the 1966 Château Calon-Ségur (streets ahead of another bottle from the same source: cedary, red-fruited, delicious), the 2003 Valbuena Vega Sicilia (muscular in this company; complex; very fine).

Earlier, we had enjoyed bottles of 2001 Chassagne 1er Cru Les Champgains from Guy Amiot (perfectly à point; nutty and terroir-laden) and my last 1999 Beaucastel Blanc (a wine I thought had finally perhaps become a bit cidery...but then, after all the Red Bull I had consumed the night before, it is possible that my taste buds weren't 100% in order!

We finished with a half of 1990 Doisy-Dubroca, a half that wasn't quite right as it gave something of a loud pop when opened. The 2005 Banyuls Cuvée Leon Parcé from Domaine de la Rectorie was quite brilliant with the steak tartare.

But whlist we ate, we could hear the rain falling on the roof and windows, rain that persisted for much of the night. In the morning, two of our party of four set sail in a hire car for Abergavenny and a food festival. Luke and I, having thought we would be in the money, with the river to ourselves and stuffed with fat fish, arrived on the bank to discover a swollen flood.

The river grew through to lunchtime. We barbecued some fillet steak and had a couple of glasses of wine. Weary, we nodded off, me in the hut, Luke on the grass outside. On waking we found the river still rising. It was as the blowing of the final whistle. We packed away what gear we had and set off for home.

Could we host the JBFWS more than once a year? Indeed, should we? Would it be wise? (Many levels to this last question, including medical!) Not sure. What I do know is that I miss it when it's gone.
Copyright © 2022 Bowes Wine Ltd  |  All Rights Reserved