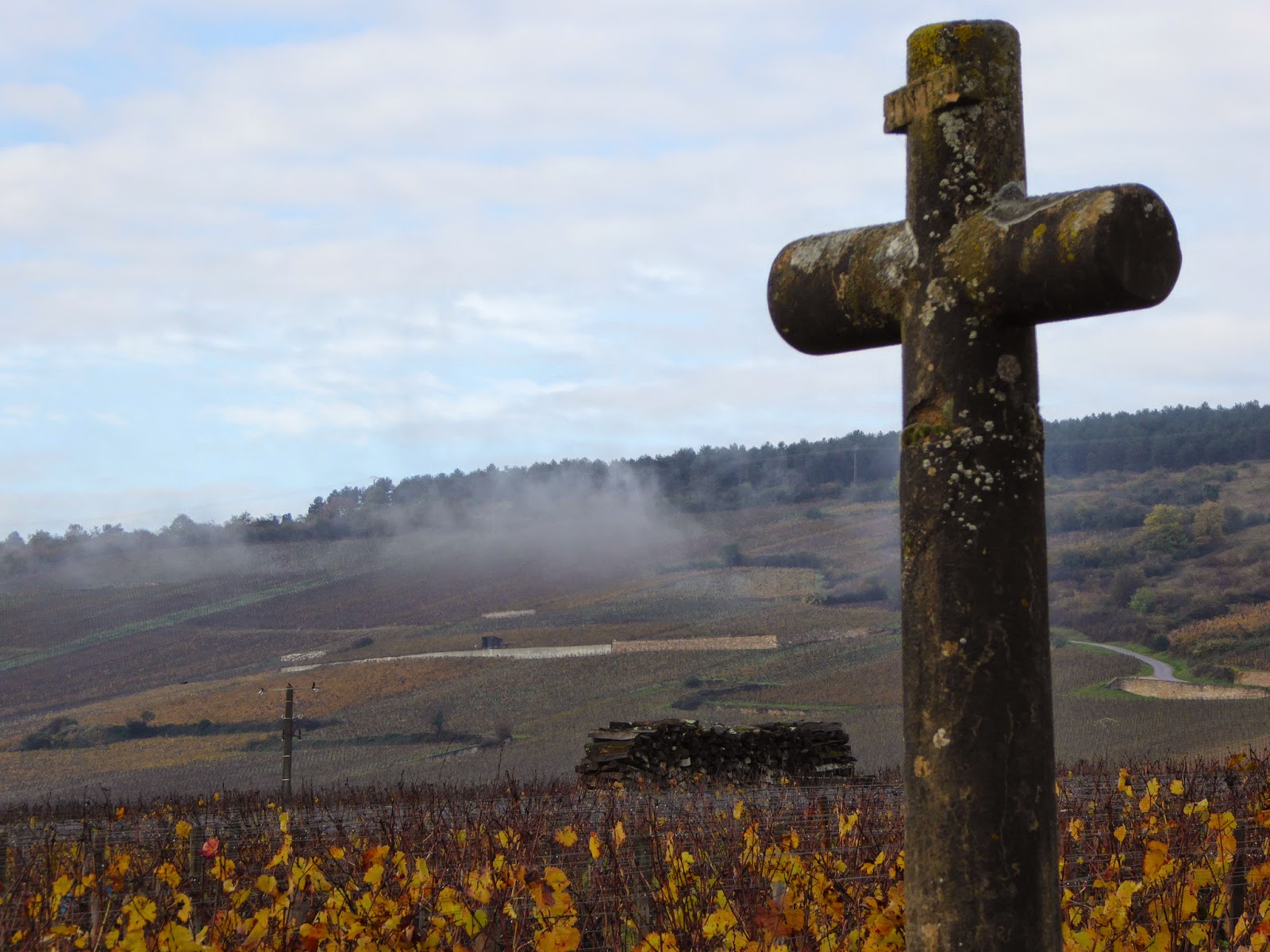 The 1er Cru Vosne-Romanee Vineyard
of La Croix Rameau: the smallest in the commune

Sunday's drive was achieved relatively painlessly: the thick end of three hours on the UK side, 35 minutes under the English Channel on a train, then an easy five hour haul down the (largely unoccupied) French autoroute to Beaune was achieved without incident, although why the weather must insist on a change to watery deluge as soon as darkness falls is anyone's guess. It calls for elevated levels of concentration; rendered the final two hours of my drive tiresome.

A twitch of my morning curtains yesterday revealed limited visibility due to a duvet of fog lying across the region. I breakfasted quickly, headed out early as I wanted to visited the offices of the company responsible for the Telepeage. My "badge" had not been sensed by the peage barrier on the drive down and I wanted to rectify this, as it makes travelling by the quickest roads very dull if one has to exit one's car at every barrier in order to either extract a ticket from the machine or feed it with one's bank card.

All became well in short order, so I hit the peage destined to be hopelessly early for my first appointment in Vosne at the domaine of the late Francois Lamarche. Thus I thought I would explore a bit, driving north from Vosne and then heading into the Hautes Cotes above Marsannay.

From Gevrey north the air steadily cleared to reveal the blue skies and sunshine above, sunshine that quickly got to work burning off to fog elsewhere, leaving the burgundian vineyard looking beautifully fresh.

Nathalie Lamarche - niece of Francois - met me and we moved through into the vat room. The wines had been racked - moved out of their wooden barrels, given an airing, and returned to large stainless steel tanks to settle before bottling - fifteen days previously and had yet to receive their additions of sulphur, thus were in a good, open state to be assessed.

And assess them I did. With enormous pleasure. Gosh, these are utterly beautiful wines. I am not sure that I will want to part with whatever allocation I am offered (and I will, naturally, accept whatever that offer might include), but should you find me offering them in turn, grab something sharpish. They are luminous, expressive and wonderfully fresh. Many have distinctly floral personalities. All are marked clearly by their origins.

I thanked Nathalie warmly for her time, feeling content after my first visit of the week. The peage beckoned. Next stop, Pernand and the cellars of Remi Rollin.

When Bowes Wine clients visit the region and request a winery visit, I send them to the domaine of monsieur Rollin for a couple of reasons: he is an extremely nice man, the sort who radiates contentment in the manner of one who knows he is using hiss considerable skills to best effect, and his wines are a revelation.

The wines of Pernand can be a hard sell. It's a little known commune that hides its talents modestly behind the Hill of Corton. Yet those tasting Remi's wines "get it" instantly. And this was proved to me once again in Hong Kong during my recent visit. The Rollin 2010 white Pernand was on the list at the Hong Kong Club and everyone for whom I poured it subsequently bought at least a case from our stocks. Hell, one client bought four!

We tasted a beautiful range of '13s. These are clear and clear-cur, defined and focused wines that have a great deal of personality. The white Pernand will last a decade, no problem. The Corton Charlemagne is one of the best wines of that vast grand cru and certainly - at least for me - a great deal better than those of some of his more celebrated neighbours.

Happy I went off to lunch, then on to my next tasting in Savigny. Savigny was ravaged - utterly, thoroughly mauled - by a hailstorm in 2013: a tempest that parked itself over the vineyards for a full forty minutes. Thus the range at Camus-Bruchon is somewhat reduced. Yet what remains is completely lovely. As ever, the colours were marked by a blueish tinge: properly violet/mauve. The fruit is dense and lifted by fresh minerality, the whole experience being one of density and ravishing fruit. These are very senior examples.

I spent a few minutes attempting to define the differences between the wines of Rollin and Camus-Bruchon and utterly failed. They are quite apart in style, yet both riveting.

On again, to the small village of Gamay, the twin of St Aubin, with which is shares the St Aubin vineyard. The wines of Marc Colin have now attained a very high level. And I find I have a minor obsession with the terroir of St Aubin. It is so varied, combining a wide range of soils and aspects. And the Colin domaine offers a great many in both red and white.

We tasted five or six 1er Cru whites, all utterly singular in style. And then we tasted some older bottles, including a minor vertical of the white St Aubin in this cellar that I almost always prefer: En Montceau. The oldest wine was the 2000: a fluid aged on the nose to honied breadth, yet offering a palate lively, dense and still very much pleasureable.

I was late, needed to grow wings to get to my next appointment. I made a phone call and explained I was to be delayed by 25 minutes. That was no problem...and then I took the wrong turn out of the peage. I realised what I had done straightaway, for I have done it once before. My heart sank. The Paris/Auxerre autoroute has offers no opportunity to turn 'round for 40 kilometers or so. I ended up driving straight up the Vallee de l'Ouche, taking the Dijon road and, finally, dropping down into Marsannay, somewhat ironically, by the road I had explored that very morning when I was overly early for my first appointment of the day.

My host for the last tasting-du-jour - Romaine Taupenot - couldn't have been more relaxed and we sat in a warm room and tasted the samples of 2013. Taupenot-Merme I have visited before. And we offered their brilliant 2010s (I am very much looking forward to drinking my own when they mature). Then they changed their agent and I lost sight of them for a couple of years. But two bottles I drank recently in Hong Kong piqued my interest again and I was very glad that my tardiness hadn't rendered my visit impossible. These are excellent wines, very age-worthy and pure.

So I was late for my dinner appointment, arrived at the house of my host half-an-hour late and bubbling apologies as I walked through the door. I was settled with delicious NV Jacquesson champagne and then we walked to the restaurant. The bottles that accompanied our food were notable, starting with the '04 Chevalier Montrachet from Philippe Colin, a wine that was fully resolved, yet with proper Chevalier focus and minerality at its core. It benefited from air, its nose drawing into focus with breathing.

We then drank a 1996 Beaune Teurons from Benoit Germain, a delightful man whose family own the Chateau de Chorey. Tragically, Benoit took his own life only a week after my last visit to the domaine, so we saluted him as we sipped this super-mature example of his art: a dense, spicy, masculine and structured Beaune.

And then the bottle brought along by my host: a '93 Volnay Clos des Chenes from Michel Lafarge. Oh, what silk, what extraordinary woodsiness, like being in a beech wood on a dry autumn day with aromas of healthily decomposing leaves all around. Heaven!

Sleep came easily. And I feel distinctly blunt this morning. Yet it's a bank holiday in France and |I have a day off, so I thought I might go and explore the villages of the Jura, just over an hour's car drive away. I will report on my findings in due course!