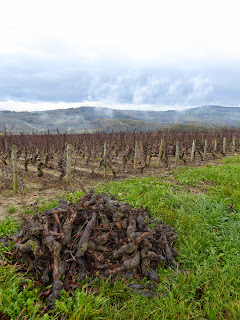 Grubbed up vines, the vineyards of Maranges
and the vapours that overhung today's early morning

I worked in my hotel room until 12h30 yesterday and then climbed into my car and set the satnav for Arbois in the Jura. Rapid progress was made along the peage and it wasn't more than an hour and ten minutes before that beautiful town hoved into view. Vine clad slopes had announced the nearing of the end of the journey and, dropping into the town itself, I parked by the larger of the town's two churches.

Alas, I was rather on the late side for French bank holiday restaurants, but found a snack bar at which I enjoyed a pretty miserable salad and a pichet of local wine, also well below par.

I toured the town on foot after my meal and then decided to head higher up. Winding up the road above town I noticed a sign for a belvedere rather too late and had to turn in a driveway further on.

The lane (it was no more than a tarmacadamed track) made its way sinuously uphill until it reached a beech wood that crowned the hill. And there was the belvedere, offering a stunning view of the town, its vineyards and surroundings. It looked rather like this, but bigger: 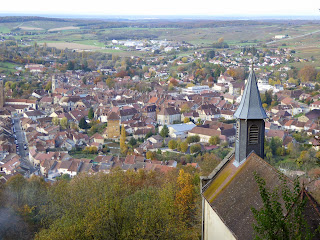 I had a walk around the top of the hill and then headed down again and pointed the car back to Beaune.

Last evening four of us ate rather well at a new-ish, all-the-rage restaurant-and-bar called Blvd 21, not far from my hotel. I dined well on sweetbreads and we had a De Sousa champagne (delicious), an '09 Nuits Murgers from Hudelot-Noellat (ditto) and then a white with the superb cheeses. Conversation must have been good as I have forgotten what the white was.

The bar that is part of this establishment is incredibly popular with the young locals. We enjoyed a nightcap at the bar after dinner and within moments, Thierry Pillot had come in with a flotilla of Austrian wine merchants. We had a chat but soon left and headed off to bed. We were scheduled, after all, to see Thierry today.

This morning's weather was a case of more of the same: cloud so low it kissed the vine-tops. Only today, the cloud/mist rose somewhat, but the skies never cleared fully.

This morning saw us down in the Cote Chalonnaise to the south of the Cote d'Or. It's a region I haven't visited for years and the landscape of rolling hills is welcome after the sameness of the more-or-less continuous slope that stretches from Marsannay in the north to Maranges in the south and affixed to which are all the most celebrated villages of Burgundy.

The Chateau de Chamilly is a stunning edifice and the young Arnaud, wine maker and son of the owner, made a highly amenable companion with whom to taste through the range. These are wines - reds and whites - of great expression and loveliness. Heed my words: the day of the Chalonnaise is coming!

We drove a short distance northwest to Dezize-les-Maranges and were met by Marc Bachelet outside the tasting room at Domaine Bachelet-Monnot. Holy smokes, these are utterly brilliant '13: transparent, mineral, intense, luminous. Both reds and whites are excellent; very much for those who seek precision and focus in their wines.

We lunched. Just as well, since my alarm clock had failed to sound this morning and I had had to pass on breakfast.

And then this afternoon, in quick succession, the domaines of Morey-Coffinet, Paul Pillot and Jean Pascal. The styles of the first two are markedly different, those of Thibault Morey being richer, a tad more oaky. Yet three of his wines in particular - the Chassagne 1er Cru Les Fairendes, the Puligny 1er Cru Les Pucelles (the best I have ever tasted from here) and the Batard-Montrachet - were completely riveting.

Thibault is a really good guy, as is his cousin Thierry Pillot, who operates from a winery next door. I love Thierry's wines. Like those of the Bachelet brothers, they have great transparency, intensity and precision. He has been known to pick a full five days before his neighbours, the reason being thaht it is the acidity that carries the terroir. Boy, these are fine wines. I wish I could get more.

And the lovely Alex Pascal has made superb wines in '13. These will offer the '13 experience (i.e. a profoundly intense terroir experience) at a reasonable price. Alex thinks these are the best wines she's made since '05. Tasting through the range, I could easily see why she's so happy with her work this vintage. Lovely, lovely examples.

So, the usual intake of breath between a day of hard tasting and a meal that will require rigorous digestion. Blog comes first, but now bath. More once I am home, as I leave Burgundy tomorrow evening to spend a night in Reims before I make a break for the chunnel and those congested English roadways...