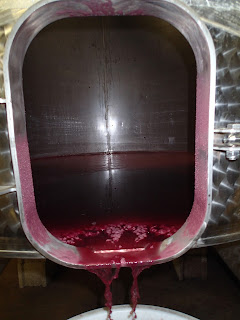 Red wine being racked out of a vat.
The red sludge left behind is the dead yeast cells.

Nuits St Georges was my destination this morning. And to say I was excited about the visit would be an understatement. I'd never been to Domaine Gouges before and it's a long time since I last sampled any of their wines, but the reputation - one that has changed somewhat in recent times - was a tonic for my right foot on the peage at 08h30.

I was met by Gregory Gouges who opened the door to my knock at their domaine in downtown Nuits St Georges. Gregory's a good guy and filled me in about the history of this venerable estate and the recent changes.

A shiny new winery was built here in 2007 and its an enterprise that operates entirely by way of gravity. Nothing is pumped here, as it is believed to have a detrimental effect on the wine.

We descended into the cellar (a stunning series of clean, homely rooms) and tasted the '14s. These liquids are utterly extraordinary. All vineyards save a small parcel of the premier cru of Les Chaignots are in Nuits' southern sector and it is here where the most Nuits-y Nuits are considered to be produced. These are profound, pure wines of considerable seamlessness and beauty: properly senior burgundies and wines that will keep into the long term with enormous grace. Enthralled sums up my emotional response, I think, rather well.

Then back to Gevrey, a right turn at the lights and down past Rossignol-Trapet's doors and on, over the railway line and eventually to the warehouse doors where is found a negociant business of Pierre Naigeon and also that of Mark Haisma, expat Aussie of French and Dutch extraction (and, to complicate things yet further, who also spends part of his year at his house in Wiltshire).

Mark's a forthcoming sort of a bloke. What Aussie isn't? He makes it clear that wine is for drinking and that his intention is to make wines to the utmost drinkability. We tastes a range of wines red and white (the wine being racked above is one of his) and I am seriously enjoying the bright clear-voiced fruit and aromas that often take in the rose-petal scent of whole-bunch fermentation. We finish with a Cornas. A bit of Syrah made a nice change to non-stop beauty parade that's been my evaluation of the 2014 Burgundy vintage. Not to say that the Cornas wasn't rather ravishing, too!

A quick lunch was grabbed at the Gevrey sports centre 'round the corner and I raced down to Gamay; no, not the grape variety, but a village in the commune of St Aubin where the domaine Marc Colin is to be found. They have a big and fascinating range here and we tasted a goodly part of it. These are delicious mostly white burgundies of wonderful expression an race. You will see some on an offer before long, if all goes to plan.

Early to rise tomorrow. I have a train to catch and 220 minutes of Benedict Cumberbatch's Hamlet to sit through once I arrive home. And if I don't get sufficient sleep tonight, the bard will be at risk of being drowned out by my snoring.
Copyright © 2022 Bowes Wine Ltd  |  All Rights Reserved