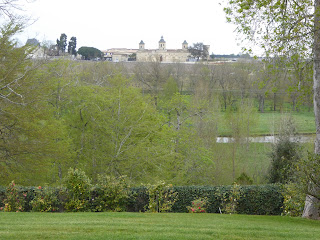 Cos d'Estournel from the terrace outside the tasting room at Lafite
Fresh is not a word to describe the condition in which I find myself sitting here in my hotel room in downtown Bordeaux having just wrestled with Bordeaux rush hour traffic for the last two-and-a-half hours.

Fresh is, however, an entirely apposite word to append to one's tasting notes of the 2015 Left Bank clarets I have been sampling throughout the day.

First things first. My 'plane from Gatwick was delayed by an hour, thus arrival into Merignac airport last evening was, in reality, this morning, and my head didn't finally find the pillow until gone 1am. And then (unknown bed; unfamiliarity with those pillows) sleep was hard to find.

Nevertheless, when my alarm sounded this morning six hours and five minutes after I had set it, I knew that I had a great deal of time in which to breakfast and cover the road up to St Julien and my first rendezvous at Ducru-Beaucaillou. And thank goodness I did. Having guessed I would be way too early for my tasting I arrived on the dot. Bordeaux distances are not what you might call small.

Weather today has done pretty much everything. The forecast - even the forecast on this morning's news - was for rain, yet the skies remained resolutely clear, the sun bright, until 3pm or so, when the heavens opened, if not fully, then enough of a crack to let out persistent drizzle of varying degrees of heaviness.

In order, I have today visited Ducru, Leoville-Lascases, Leoville-Poyferre, Pontet Canet (to include one of their legendary lunches with leviathan cheese table), Mouton-Rothschild, Montrose, Cos d'Estournel, Lafite-Rothschild and, lastly, Calon Segur (finish in St Estephe and it's always going to be a long road home, no matter where you're staying).

All these visits have given me the inkling of an idea about the style of the wines of the northern Medoc, an inkling I intend to turn into something more definitive tomorrow when I get to taste a great many more wines from across the chateaux hierarchy.

What I have found thus far is silk, cream, cashmere, berries (red and black), juiciness, minerality, modest levels of alcohol and looooong finishes. These are pretty wines: wines of the sort I want to drink. They don't bang on about how clever they are, don't want to stand there in the style of shirt Aussies have come to call a "wife beater" and flex their muscles to make you go ooh, aren't you a big one. Instead, they are clad in haute couture, aren't wearing much make-up, move with a slightly feline grace.

Oh, and many have rather adorable dimples. They will keep very well, yet the wines lower down the chain of command will be enjoyable early. Most are utterly delicious.