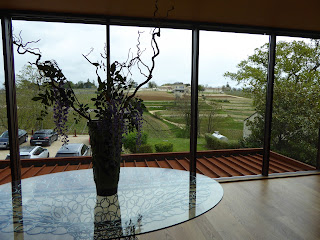 First and foremost, I have to state that there are a great many worse places to find oneself on a wet Thursday morning than in the company of Denis Durantou tasting a line-up of his wines. But anyway, I am getting ahead of myself. It was a Thursday morning that started at my hotel in downtown Bordeaux, with me rising early to pack, pay up, and vamoose.

Duly vamoosing, I hit the morning traffic and crawled, precipitation not improving the standard of local driving nor the pace of the action.

With uncanny ability, I arrived wildly promptly at my day's first appointment. And that's where M Durantou comes in...or, rather, where he pokes his head 'round the door to check out who's just arrived outside his tasting room at Eglise Clinet.

Was there ever an address that offered wines of such extraordinary value? Much of the line-up here is a bargain in whatever vintage you'd care to name, but in a year like '15...wow. And was there ever a wine so worth a sizeable ticket as Eglise Clinet? Well...the answer is possibly yes in this case, but both it and its second wine Petite Eglise are completely wonderful, offering the sort of warm, enveloping comfort one realises when one gets into one's own bed after an extended period away.

There followed: Evangile; Canon (a James Suckling 100-pointer this vintage); Ausone and all its attendant wines (seven all told); Cheval Blanc (to include an ambrosial Yquem), and Vieux Château Certan. That was before the real work started with the Union des Grands Crus tastings at Beauregard (for the Pomerols) and Couspaude (for the StEms), plus rapid stops at Pavie Macquin (really just to taste the Beauséjour Duffau Lagarosse), Angélus, La Conseillante, Canon La Gaffelière and Barde Haut.

With that lot under my belt, I had insufficient time for the Jean-Luc Thunevin tasting in the centre of St Emilion and also had to pass up on the opportunity to sample the wines of Jonathan Maltus. Shame; shame...And all the while the rain fell and dampened the vineyards, but not my mood, for the wines are really very good.

I sat outside a bar under the magnificent troglodytic church of St Emilion protected by an umbrella and enjoyed a small beer and a cigar., It wasn't the most homely of spots for such an activity, cold and damp as it was, but it allowed me to reflect on my days in Bordeaux and the wines I'd been sampling.

The stop at the bar was, in part, also an attempt to kill some time, as my flight was not until 22h40, but eventually I climbed back into my hire car and made my way slowly through still rain-affected traffic to Mérignac and Bordeaux's airport.

What with one thing and another, I didn't arrive home until 02h30 on Friday morning, but then slept the sleep of the tired and sensorially overwhelmed. Focusing on wine tasting for days on end does that to you.