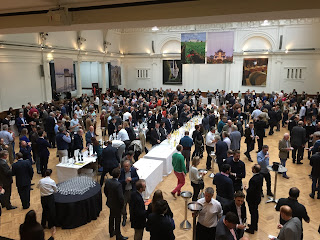 The Union des Grands Crus de Bordeaux are a pretty active bunch and, among their many activities, they like to give those in the trade a thorough look at the newly bottled vintage at about this time every year. This year was the turn of 2014: a most interesting harvest and one that I was really rather excited about revisiting.

The release of the '14 Bordeaux vintage was met with something of an ear-splitting silence. Most merchants had a pretty firm inkling that consumers were not yet sufficiently gruntled with the region to be buying new Bordeaux wine in spades and consequently weren't prepared to buy stocks of wine to hold.

Their circumspection was not, however, anything remotely to do with assessments that had been made down in the region during the week of the primeurs tastings in early April 2015. Indeed, the reaction of the world's combined wine sector was,  after a first look, extremely positive, my own included.

The word "classic" is bandied about overly often. Yet here were wines that were, in general, lower in alcohol than most other recent harvests, cool of fruit and with an elegance largely unprecedented in the last decade or so. Even those not enamored with the word were whispering "classic" when no one was watching.

So...what did I find out? I had opted for the afternoon session and tasted reasonably hard, managing to avoid the long conversations with old wine trade mates that often punctuate this event. And on this occasion I started with the dry white wines...

...and liked them very much. They are a particular bunch, reminding me a little of the 2013 white burgundies in that they offer the same sort of sweet 'n' sour effect in their fruit/acid balance. They are also dense and expressive and, mostly, crying out for more bottle age.

Reds - where this vintage clearly excels is in the great Left Bank communes of St Estèphe, Pauillac and St Julien. There are some extremely fine wines coming from Margaux, too: Brane Cantenac leaps to mind, but wasn't the only notable.

Further to the south (and don't forget that we're talking about far from insignificant distances, here) the red Pessac-Léognans offer a more complicated picture. Curates egg rules the day with these wines: they require a degree of picking over.

It's on the Right Bank that one finds the nadir of the 2014 harvest. My utter pleasure at the best of the Left Bank is all to do with the completeness of the wines, allied to their subtlety and elegance. On the other side of the estuary, most often the wines are not complete, rather lack a certain something.

It's not that the St Emilions and Pomerols won't give pleasure in time. But they will not, I suspect, be so capable of eliciting the gasps of joy as the Cabernet-dominant clarets of the Médoc gravels.

Langoa- and Léoville-Barton: utterly beguiling and completely lovely. Those lacking these in their portfolios should jump aboard forthwith.

Lynch-Bages and Pichon-Baron - a remarkable similarity at present: wonderful purity of very dark fruit. Where they differ most is on the finish, with Lynch offering more in the way of energy, the Red Baron with great, dense sustain.

Talbot - as good as I have tasted. Delicious.

Two more observations - I don't especially like what Beychevelle's up to. Others do. A new winery here, but tasting the St Juliens, all seemed true to type and vintage save Beychevelle, which, IMO, is trying too hard. And Sauternes. Lordy, what loveliness. La Tour Blanche; Rayne-Vigneau; Lafaurie-Peyraguey; Giraud; Coutet; Climens; Suduiraut; Doisy-Daëne. It matters not. All just completely delicious and deliciously complete. Get them, when they're cheap!