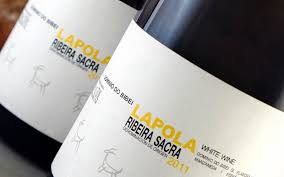 Some years ago I visited Galicia to taste wine. It was the dead of winter, yet the beauty of this Atlantic coast of Spain was still easy to discern.

After driving south from Santiago de Compostela and taking in a number of Albariño producers en route, we turned inland, following the River Miño which quickly divided and dropped into a breathtakingly deep gorge clad in vertiginous vineyards.

Finally, we arrived at Ribeira Sacra, a land of high hills and deep valleys, the slopes striped with the evidence of ancient terraces where vines were planted by the Romans. And here we tasted the fabulous wines of Dominio de Bibei, wines that we offered some time later...and wines about which I have received the most positive of comments from those who bought them.

I bought them too and enjoyed each and every bottle. You can see a video of me tasting a red wine produced by Dominio de Bibei here. 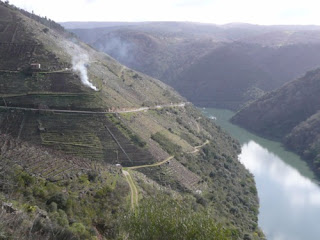 The River Sil, a tributary of the Miño, and the
head-spinning vineyards of Ribeira
As well as a number of red wines, Dominio de Bibei make this superb white. I have had a number of clients contact me since the offer, asking whether we intended to restock.Well, now we have with the new vintage, but I cannot say that quantities are all that great. I haven't yet tasted this release, but intend to snaffle some all the same:
2015 Lapola, Dominio de Bibei
£90 in bond per 6  Drink 2017-21
"The 2015 Lapola is a white blend of Godello with 15% Albariño and some 5% Dona Blanca from various younger and older vineyards on clay and sand soils rich in schist. It fermented in a combination of 600-liter barrels, 1,200- and 2,400-liter oak vats and egg-shaped cement vats with indigenous yeasts. The wines were kept in their fermentation vessels and then blended and put back in the eggs for natural stabilization. It has a young nose with some creamy notes intermixed with flowers, white fruit and a touch of fennel. The palate felt very harmonious, clean and focused, with primary flavors." Luis Gutierrez
"Rounded, full citrus flavours, deep fruited and with a dry, light grain adding length and complexity to that ripe pear flavour. Mineral aftertaste and exceptionally long." Julia Harding MW