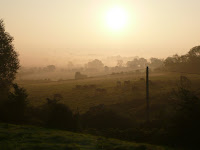 Oh dear. The view from the office again, this time with some cows. Click on the image for a bigger - and prettier - version


You know how sometimes you just feel like a bit of a change? Well, I was roaming through our wine rack last evening. It's a double-depth structure that we had made to fit perfectly into a disused fireplace in our dining room and is beneficially chilled by the cool air that descends the flue. I was rummaging for a taste bud thriller; something a bit punchy to titivate a slightly jaded feeling both Victoria and I have been suffering with increasing intensity since the due-date of this baby (the bun is now overcooked by 8 days or so).

My hand alighted on a bottle, the capsule of which I couldn't immediately put a name to beyond recognising it as a Châteauneuf. Pulling it out, the bottle was revealed as a 2004 Vieux Donjon, given to me singly at the property by Mme Michel. I had half been planning to give this a few years before plundering its assets, but jaded is as jaded does and so (as our Australian cousins would delightfully have it) I "ripped the scab off".

Before I convey my thoughts on the wine, I must state that I absolutely love Châteauneuf-du-Pape, or Ch9 as I abbreviate it in my notes. If claret is a wine of the head, burgundy a wine of the heart, what then is this Grenache-based wild thing from the southern Rhône Valley? Wine of the loins? Wine of the Gut? (This latter perhaps perversely apposite, as Ch9 often has something of the andouillette (offal sausage) about it.)

There is a flamboyance of aroma, and animal quality of the fruit on the palate. The one thing it often lacks is focus and precision. If these are things you crave in wine, perhaps the 2004 vintage in the region is the one to bring you on side and turn you into as much of a Ch9 fan as me.

2004 Châteauneuf-du-Pape, Vieux Donjon
A brilliant nose from the moment the cork is out. This is both a rich embarrassment of fruit and those signature animal/game aromas. The scents are laced with rich spice: liquorice root and the mincemeat stuffing of mince pies. The fruit is red and black, the blackness all down to cherries and bramble. Earth notes add nuance and there's the charred game of a venison kidney that's worked its way through the grill of the barbecue into the embers.

Sip and the wine is medium weight, perhaps a little more, but its size is contained by the coolness of the fruit. The fruit is very concentrated, backed by beautiful, elegant and fine tannin, fully integrated. Hints of cocoa and dried Mediterranean herbs.

This is a wine full of character. The nose is vivid; individual aromas clearly defined. Crisp, complex and lovely.

I can find this wine on the internet for not much over £200 in bond; it puts claret of that price to shame.

Drink it from now for another 10 years plus. If I had it in the house, I am not certain I would be able to keep my paws off the corkscrew.

Incidentally, thinking of Victoria enjoying a glass of Châteauneuf in the late stages of pregnancy reminds me of a story about friends who were in a similar state (although not quite this far advanced!) crossing the Atlantic on American Airlines.

After several hours of sleep, the female - and evidently heavily pregnant - half of the couple turned to her husband and admitted a sudden craving for a whisky soda. Her other half (a medical litigator; perhaps this is relevant) encouraged her to order one, so a stewardess was called only to react like someone who has found a decomposing dog's nose in their chilled pea and mint soup. The Amercians are distinctly anti the consumption of alcohol in pregnancy. So taken were my friends with her umbrage that another whisky and soda was duly ordered (although left unconsumed) simply to compound the stewardess's disapproval.
Copyright © 2022 Bowes Wine Ltd  |  All Rights Reserved