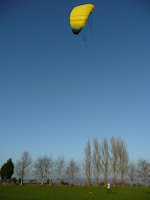 
I have succumbed, dammit. My smugness has backfired. Having witnessed - sympathetically, I will add -the viral struggling of more-or-less everyone I know, to each advising the use of a product called First Defence when next they feel themselves on the cusp of descent into the common cold, I now seem to have fallen victim myself.

The germs have been buzzing around the house for some time. Joseph's required a damp wiping first thing to remove the crust from parts of his face where it has accumulated over night; Isabella's started to dribble and wheeze. But up until two days ago, I was ticking along nicely.

Then there was a hint of an ache in the morning, a dryness of the throat. First Defence was tracked down in one of the first aid boxes with which Mrs B has decorated certain corners of the house and it was liberally sprayed - as per instructions - up each nostril. Any normal germ is totally stumped by this treatment. First Defence is a gel that smothers the bug before it can get going and is usually the first and only line of, well, defence that one needs. This time things are gathering pace despite its intervention and all is looking a touch gloomy for the New Year celebrations tomorrow.

Christmas in the Bowes household was a delightfully laid back affair. Victoria's parents appeared bearing a turkey of suitably modest size for a 4.5 person lunch and all sorts of seasonal vegetables were either roasted in goose fat or steamed to the point of being al dente.

To drink? Champagne's a non-negotiable at Christmas time, so we popped some of the Philipponat rosé that appears on our drinking list. One note on this wine: do not drink it straight from the fridge. Take it out at least 40 minutes before you pour it out and preferably leave it for those 40 minutes with the cork out. NV Gosset has been in Octavian for a while and is still crisp 'n' dry and very flavoursome. A number of bottles of our Prosecco filled any fizzy gaps that appeared.

As for non-fizz, we drank a deeply coloured, blackcurranty, plummy claret from the relatively obscure Premières Côtes de Blaye: the 2000 vintage of Chateau Les Grands Maréchaux. From a property previously unknown to me, this is now drinking ripely and crisply well, with no hurry to get on with the rest of the case. Whites included a few bottles of the 2006 Sauvignon Blanc Oak Valley, a South African recently added to our drinking list. It's very good, too.

Yesterday we went out to fly the Christmas kite. It's an activity I rather enjoy and one that's provided me with a theory linking kite flying to fishing. Here goes:
Remember making tin can telephones with taut lengths of string when you were young? Taut string's a good conduit for communication, evidently, as the excitement of kite flying is all about being in contact with that most elusive of elements: the air. To us earth-based creatures, suddenly to have a telephone line to another element and to be able to feel its power and movement transferred to us via the string of the kite is something extraordinary bordering on spiritual.

Similarly, the fisherman - at least, the fly fisherman - holds his fishing rod (how like an aerial!) from which the taut line enters the water (another element alien to us dry creatures of the soil) and feels the buffeting of the river's flow. As with kite flying, it offers us free local calls to the unfamiliar, the exciting.

None of this helps me catch fish, sad to say.
Copyright © 2022 Bowes Wine Ltd  |  All Rights Reserved