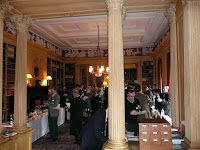 One of many recent burgundy tastings, this one held in the library of the Travellers' Club in Pall Mall. The man on the far right waving his arms is Bertrand Ambroise, a celebrated producer of highly individual wines

It is a cause of consternation and frequent grumbling in the UK wine trade that so many wine tastings fall on the same day. Take last Tuesday. There were six that I knew of, which means that there were probably several others that I didn't have in my diary. Attending them all would have been a) logistically tricky as, although three were in Pall Mall, the rest were spread out between Battersea and St John's Wood, b) detrimental to the ongoing health of one's tongue and c) a waste of time, as after the first 80 wines or so, one's powers of adjudication become severely compromised.

Most of the tastings of the last few weeks have focussed on the newly released 2007 burgundy vintage and, to be frank, it's been a joy to find myself on the business end of a wine glass. It's just that one's palate gathers tannin from the red wines and acidity from both colours and eventually one finds oneself tasting through a mask of residual gubbins left behind by the last three-score samples with which one's washed one's mouth out.

I have now filled an entire hard back tasting book and, with very few exceptions, the notes have been positive.

Plans are almost complete for my forthcoming trip to the Rhône: a week in which I'll be attempting to fill another tasting book, this time with 2007 Côte-Rôties, Hermitages and, perhaps most anticipated, Châteauneuf-du-Papes. This is my favourite buying trip of the year. Not only do I have a passion for the wines, but to spend a week in that landscape, eating that food, is a pleasure.

Parker has already published his notes on the southern Rhônes of the vintage and boy, if the scores were any higher he'd need a sunroof.

All of which adds up to a trip that is stirring excitement in the pleasure centres of my cranium!

Incidentally, my last morning will be spent visiting a number of wineries in the Bandol appellation. Those seeking complex, long-ageing reds for very sensible money, look no further.
Copyright © 2022 Bowes Wine Ltd  |  All Rights Reserved