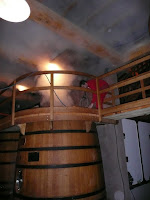 
I had a moment of clarity yesterday morning on the way to Gigondas. We had stopped to snap off a few photographs - the sun's rays breaking through the lowering cloudbank; the morning light falling on a distant church: all very Wordsworthian stuff - when I suddenly remembered that I had been wanting to visit Clos du Mont Olivet this visit. The wines at this estate have been improving steadily from an already lofty level and I thought we should swing by and see what's what.

I placed a 'phone call to the domaine having looked up the contact details in Robert Parker's useful tome Wine of the Rhône Valley and arranged for us to hove to at 9am sharp this morning.

Nine o'clock on the dot found us at the door of the domaine which is situated next to Vieux Donjon in Châteauneuf-du-Pape. We were welcomed by Thierry Sabon, one of the family that owns the domaine and together we descended into the cellar to taste.

There are two cuvées of red Ch9 here, the "basic" (I detest using this word, but can think of no other) and the top of the range Cuvée Papet.

I bought a case of the 1990 vintage of this latter wine when it was released and am now down to my last bottle. It was like port in its infancy and matured into an extraordinarily complex bottle with time. In the interim, Parker had given in 97/100 and the price had risen to over the K in the secondary markets.

Anyway, both wines in 2007 are utterly beguiling. We are talking about a traditional style of Ch9, an attribute that doesn't prevent the '07s from being pure of fruit, expressively mineral, intense and long long long.

We were at Pegau for our 10 o'clock appointment, but we were the only ones that were. The car almost became stuck in the copious mud churned up by workmen in diggers engaged in some travaux at the back of the domaine and ringing and knocking of various doors and bells produced silence only broken by the banging of the builders.

We were about to give up and go for a drive when a white van appeared flashing its lights and M Feraud pulled up full of apologies that his daughter Laurence was absent. He explained that she was in town, attending a tasting at which vignerons would select wines from Ch9, Vacquéras and Gigondas to be sent to be judged in the big wine concourse in Paris. A mischievous look came over him. "You should go along", he said and gave us full instructions as to how we find the venue and what to do once there.

First of all, of course, we had to taste the 2007s. In danger of repeating myself, this is another estate that has excelled itself in the vintage. Of the 2007s, we tasted the Cuvée Réservée (the entry level Ch9 here (is that better than "basic"?)) and, for the first time, the ultra-rare and super-expensive Cuvée da Capo. Great Scott, these are mind-bendingly good! Pegau produces wines that are among the best and most traditional of Ch9 and the vintage has brought out the absolute best in them. We left smiling like children that have just been given puppies for their birthdays.

So, to the assembly of vignerons at the selection tasting. We found the venue with no problem and within we discovered a mighty throng gathered at small tables, 3 or 4 seated at each and each table supporting a flight of 12 or 15 wines. There must have been upwards to 100 people tasting on the ground floor.

Upstairs was the same scenario and the organisers and tasters could not have been more welcoming. The judging having been completed, we were free to get stuck in and range about the tables, tasting here and there. The bottles were unlabelled, the entire tasting being conducted blind. But I am promised that the results will be emailed to me once the Parisians have made their decisions and from there I will be able to identify our favourites.

From there we had once last shot at grabbing a bite to eat in Le Pistou, one of my favourite restaurants in town. We had found it closed at both lunch and dinner times on the previous two days, but were, at last, rewarded. Le Pistou's a small bistro serving very good and good value fare. I was circumspect and ordered a green salad starter but threw caution to the wind for my main, not being able to resist confit de canard.

And then Beaucastel. I must confess to never having visited before and I had no idea what to expect, save for wines of the highest quality. The experience was simply jaw-dropping, our tour revealing immaculate, vast cuveries under impossibly high vaulted ceilings; squeaky-clean room after room of cellars, all beautifully lit. If I were wine, I would want to live here. It's a luxurious place to grow up.

We tasted three negoçiant cuvées - a Vacquéras, a Gigondas and a Ch9: Les Sinards - followed by the domaine Ch9, the white and the Vieilles Vignes Roussanne. I can say little. My head's still whirling. Brilliant, brilliant wine.

A quick dash back into Orange, where I deposited my co-taster at the train station for his return journey to Zermatt. Tomorrow will find him on the piste.

I turned the hire car south and am now installed in a shabby establishment called Grand Hôtel des Lecques in St Cyr-sur-Mer. I wouldn't recommend it, but it's just for one night and I am off early into the vineyards of Bandol for a couple of tastings before I must drive to Nice airport for the flight home. There's no snow forecast for the UK for tomorrow and I hear that Bristol airport's operating normally.

Joseph told me earlier on the 'phone that he's missing me and I am looking forward to being with my family soon, semi-uncontrollable though two-thirds of them are!