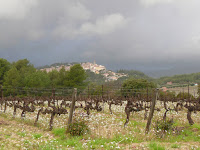 Old vines beneath, moody sky above and in between a very pretty Provencal town, the name of which, sadly, escapes me. This view was captured half a mile down the road from Tempier and the vineyards are those of Bandol

At last I have time to sit down and compose the final blog of my week in France. I am now at home and can report that the transition from French to English soils was not achieved with any ease. I have enjoyed elements of food poisoning rather more. More of this later…

I woke in my scabby hotel and descended for what passes for breakfast in such establishments: coffee that's been sitting on a hot plate since just before first light, cold mini-croissants and a yoghurt with honey drizzled over it. Thereafter, I cleared out sharpish.

Having been very generous with my estimation of the time it would take me to get to Domaine Tempier, I had 40 minutes to kill which allowed me to explore the landscape in my hire car (a diesel Peugeot with as much grunt as a rutting gerbil).

Why have so few wine collectors heard of Domaine Tempier? Bandol as a whole seems to be a closed book to the majority of the wine-buying public and this is a shame. At their finest, they remind me of a cross between the best sort of Châteauneuf-du-Pape and a top Côte-Rôtie and Tempier is among the best of them. Indeed Clive Coates MW described Tempier as one of the great wine producing estates of the world and I would agree.

If your interest has been piqued, I would urge you to go out and buy a bottle from one of the better estates and give it a go, the only problem being that it would be sure to be an immature wine. Bandol is really a wine that only shows its best with a lengthy lie-in somewhere dark, cool and decently humid.

Being the butt-end of the year, Tempier had had to enlist the services of its ex-wine maker to show me the wines. I wish I could remember his name, as he was a kind and very hospitable chap who even went so far as leading me to my next appointment, which was much further away than anticipated and so tricky to find that he evidently dared not leave me to find it by my own devices.

As in much of the Rhône, Bandol has thrown out miraculous, fabulous wines in the 2007 vintage. We started the tasting with a 2008 or two. Not having received the September deluges that struck the southern Rhône in the vintage, these are very good indeed, but really a warm-up for the glittering '07s.

We tasted the Cuvées Classique, Migoua, Tourtine and Cabassaou: all quite different from one another, all highly concentrated, showing cool, beautiful fruit, gargantuan length and a maxed-out dose of terroir.

Migoua is the wine that many consider the plum here and, indeed, it has a unique complexity and finesse. Tourtine has a great deal more Mourvèdre - the mainstay grape of this appellation - and is simpler, more masculine and denser. Cabassaou is almost all Mourvèdre, coming from a down slope continuation of Tourtine, divided from that vineyard only by a line of small olive trees. Being a simple, masculine sort of person, I often find myself plumping for Tourtine, but the Cabassaou in '07 is simply stunning.

On the road and following the white Citroen of my Tempier host, I placed a call to my next destination: a sorry-I'm-late-but-I'm-on-my-way sort of call. Pas de problème, I was told and I motored on.

Domaine Terrebrune's hidden down a tiny country lane in the hills above a town called Ollioulles and it was there that I met Reynald Delille, the estate's owner. What pleasant company to have whilst being shown the cellars and wines. M Delille has a slightly eccentric manner, but is so evidently obsessed with the wines of Bandol and his estate in particular that one can only get caught up in the occasion.

And we tasted some extraordinary bottles. Walking around the narrow subterranean tunnels beneath the property, one finds oneself hedged in by stacks of bottles from vintages going back a couple of decades, all kept for showing to interested parties. I am happy to say that I was one!

As at Clos des Papes in Ch9, only one red wine and one white is made here. Unlike Clos des Papes Terrebrune also market a rosé: "The best rosé in the world," said M Delille and who was I to argue?

Again, I had to make my apologies. I had been surreptitiously glancing ay my watch and was only too aware that my flight back to Blighty was looming ever larger.

My satnav dropped me onto Nice airport with reasonable accuracy and I lobbed the keys through the door of the car hire returns office before speed walking to check-in. "Annulé" - cancelled - the attendant easyJet girl told me and I had one of those moments when things stop for a a second or two as one's brain, knowing it's about to have something of a workout, regroups and gives itself a bit of a back rub.

I ended up flying into Liverpool where I hired a car and drove 3 hours to get to Bristol airport. Bristol had been badly dumped on, snow-wise. At the hire car return car park, cars had been left willy-nilly. My own car was under a foot of snow and it took me some time to clear it and some time more to semi-slither my way out of the parking space and get away.

I finally arrived home at almost 11 o'clock. I would be happy never to see John Lennon airport again.
N.B. Something very strange occured the other night when I was posting my last blog from Orange. I've never loaded a piece of film onto the blog and it took a very long time. When the blog was delivered to my in-box the next day, it was a posting that I had written months ago. No idea what had gone on, but if you would like to see a piece of film of the giant view from the top of the Dentelles de Montmirail above Gigondas, do go to the blog and scroll down, or if you're reading this on the blog...just scroll down!
Copyright © 2022 Bowes Wine Ltd  |  All Rights Reserved