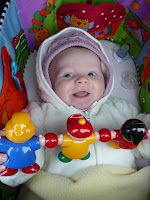 Isabella's glad to see her dad after a week away


I am sitting at my desk sipping a most unusual wine and one that's a sure fire contender for The Daily Drinker. Victoria's gone out to play tennis, the children are in bed asleep and I have taken the opportunity to open a sample bottle. It's one I've tasted before and it's at least as good this time 'round.

The wine's a Muscadet. Okay, so far, so normal. But the wine's a 1995 Muscadet, which puts it into the realms of the extraordinary. I remember hearing perhaps a decade-and-a-half ago that some Muscadets age well. I even tasted one once at around that time and was not unduly bowled over. But this, this is another matter. Rich and mineral and spicy; bouncing with vitality. It's raw seafood's worst nightmare.

I've been visiting London two and three times a week of late. Tastings are very much still in season and I have attended many of them. The '07 burgundy frenzy has petered out and now these events are split between importers' range tastings and generic sip-a-thons. Thus I spent an afternoon recently at the Institute of Directors sampling a legion of Austrian wines (half-concentrating on the reds, many of which were superb).

Elsewhere at a range tasting, I found myself writing notes on everything from Crémant de Bourgogne to Rioja via Italian whites are red burgundy i.e. a real work-out for the buds.

It appears that, out of the cold-blasted wilderness that was the West Country on my return from France, has come something not unreminiscent of spring. We have been gardening today and I was met by a powerful buzzing when approaching a clump of Helleborus foetidus (our native Hellebore). It was full of bees. How quickly they must have roused themselves from their winter torpor. A shot of honey does most animals a power of good. Plus Cleopatra used it for birth control, but that's another story...
Copyright © 2022 Bowes Wine Ltd  |  All Rights Reserved