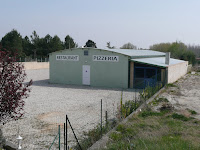 A classy joint spotted in the Médoc during my visit; atmosphere not included

Almost apologetically, merchants and their polar opposites, the journalists, have returned from Bordeaux with some pretty sparky news. Missives to clients/readers of the "Sorry, guys, but it's actually a good'un" sort have been pinging around the airwaves and the message is being heeded. Wines are selling. All's right with the world.

So, this recession right. What's that about? I mean, are shoots green, or what colour are they? Have we bounced, or is that simply my head wobbling from too much tannin?

I feel that a trend is emerging in Bordeaux and I am not altogether sure that it's a healthy one. Increasingly, in anything but the toppest vintages, the minor wines are being ignored and everyone's piling into the Firsts, the super-Seconds, Parker's Pets. Long gone are the days when a wine collector would announce, " I'm a Beychevelle man", filing away a few cases of the stuff every vintage regardless of whether Beychevelle had suffered a plague of frogs that vintage or made their best wine ever.

This situation has arisen for a number of reasons. First, Robert Parker and those others that insist on scoring a foetal claret with exacting scores make consumers believe that there are years when nothing of interest is produced or, rather, that they should only be buying wine from top scoring properties and in top vintages. Anything else is now regarded as infra dig.

This attitide is compounded by the French. Rather than charging low prices for "off" vintages that have produced toothsome wines for early drinking (don't forget that this is about as bad as things get in this world of highly technical wine making), they charge what they think they can get away with. This habit is dispicable and has to stop. Sadly, the fact that we return year-after-year like goats to the Trinidadian curry house probably doesn't help.

So I would like to propose a toast; a toast to average wine, without which we wouldn't have a measure by which to assess the greatness of other fluids. I would like, herewith, to salute the absence of genius, the mundane and the ordinary. God bless them and all who are prepared to pour them into a glass.

(Victoria has asked me to point out that in glorifying average wine I am in no way talking about the 2008 Bordeaux vintage. It's a very good vintage that's produced a great deal of really super wine. For laying down. Nice.)