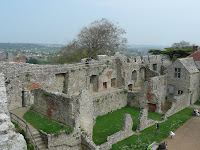 Carisbrook Castle, where Charles I was caught escaping through a window

The Priory Bay Hotel on the Isle of Wight is a fine place for children and parents alike, having its own beach, small golf course, swimming pool (as often enjoyed by the local duck population at this time of year as the reluctant guests), tennis courts and a couple of good restaurants.

I took a 6-bottle case of wine along, as did my sister and brother-in-law, theirs, I must confess, a rather more lofty a selection than mine.

The pick of the bunch were 1996 clarets: Duhart-Milon and Chasse-Spleen. One of the bottles of Duhart, however, produced some wrinkled noses. It was loaded with brett and was very, very animal, if not downright pooey. The other was quite different: mellow and rich mature Pauillac. The Chasse was a delight, red and black, softened by time.

The Bowes tribe have been going to the hotel for the last few years at about this time and for some reason the hotel evidently feels the need to telephone Bordeaux and tell the châteaux the dates of our booking, as we always manage to hit the middle of the en primeur campaign slap bang. The Blackberry fills the air with its incessant gonging to indicate the arrival of another wine offer. It sounds like the Tibetan call to email. Doing business sur le plage is a pain, alleviated by the fact that these wines are selling rather well. Pricing is keen-ish; the vintage in the "very good" class. One is almost tempted to ask "what recession?"

I have joined Twitter; I am a Twitterer, am getting into Twittering. I am told that it can be a good way to get one's business "out there". We shall see. It always seems a bit vain, imagining that the world is interested in the minutiae of one's daily existence, but I do intend largely to keep it to wine-based observations.

I have seen my first swallow! The other morning, there was that chattering call that sounds - along with the harpy screeching of the swifts - like the voice of summer. The first one always gives one the contended feeling that the world around has fully emerged from its winter doze and is now going to knuckle down and get on with the tasks of producing increasingly impressive bits of vegetation, ripening fruit etc.

Earlier the same morning, the first cuckoo. My sense of seasonal contentment was almost complete. It must mean that it's almost time to cast the first salmon fly of the year and yes, that's happening next week. The John Buchan Food and Wine Society convenes for its annual few days in the Borders; a few gourmandine days from which I will return as ever, troubled that my spleen is about to exit stage left, accompanied by a number of other useful organs. I will detail the high points in due course.