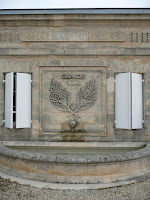 Château Climens, where en primeur tasting involves dipping into 8 or more barrels, all quite different

The 2008 Bordeaux campaign is going with something of a swing and it was highly instructive to visit London today to taste a selection of chateaux who were showing their 2008, 2007, 2006 and in some cases 2005 vintages in the Portico Rooms in Somerset House.

How much easier the '08s were to examine than they were just one month ago in France. How much softer the tannin and more settled the fruit. It would be a luxury to go back and submit oneself to the same tastings over again, as I suspect that some of the wines I wrote off as being dry and charmless might have opened up a bit. But one can only work with what one has and the Bordelais decree what that might be.

2007s were a mixed bunch, some gutless and uninteresting, some complete, albeit as if seen through the wrong end of a telescope. Some were highly impressive.

Most of the '05s have started to go into their shells, like a tortoise on the highway in the headlamps of one's tastebuds. What intent, though. What completeness of form and structure. I await their maturity as a tea-starved geriatric waits for the morning kettle to boil.

And I promised, on my new Twitter page (whatever you're thinking, I know, I know), to disclose something of the wines enjoyed at a barbecue the other evening; an evening spent in the new gazebo (heated) of local friends, ex-Hong Kongers settled welcomingly close by.

I took a 1998 Hermitage. Well, we had to pop home to bathe Isabella and Big Mike - visiting from Copenhagen, where he's recently moved for work - had expressed an interest in Syrah. As he's a new client, I thought I'd dig out this bottle, bought at auction I forget when.

Bernard Chave was the maker. Remington-Norman tells me that Bernard is father of Yann Chave, who is altogether better known. The wine was fleshy, rich, softened, complex; very, very delicious: Syrah doing its full-on thing.

Second goodie was 1998 Château Larmande and what a classic St Emilion. That grey character, like plums dropped onto a slate table. Softened, too. Good wine. Too good for the bar-b, perhaps, but then the bar-b here's an outdoor gas-powered Aga-alike. What a cop-out!