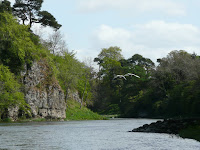 
I have returned from a few days in the Borders: our annual pilgrimmage for the John Buchan Food and Wine Society. And it's going to take a day or two for my system to return to its usual steady tick-over after such devil-may-care days of fishing, eating fine food and the consumption of quite so much good wine.

Evening one was the biggie. This is a phenomenon to be welcomed, as decreasingly debauched nights render one's departure an easier thing altogether. I had pitched up mid-afternoon, caught up with our host, Luke, and then headed down to the river to cast a fly for a few hours before it was time to move on up to Luke's house and start prepping the venison casserole. I was to be guest chef for the first main course, not in an attempt to surpass - or even equal - the exploits of Henry (the culinary genius behind every JBFWS meal to date), rather to give him something of a night off.

So I prepped the casserole and bunged it in the oven for its 3 hour cooking time and we all decamped to Luke's decking for several glasses of 2002 Chassagne-Montrachet 1er Cru Les Caillerets from the cellars of Guy Amiot. This is a Bowes Wine wine and boy, it's a goodie. It should be served at roughly the temperature of a Scottish house in April with the door open. Mineral, peary and quite delicious.

Henry dug out some terrines. He's a dab hand at this arcane artform, as we've found before. And he'd travelled to Scotland by train with terrines and all other food for our three days stashed in the sort of shopping trolley beloved of antique dames wearing Queen Elizabeth headgear. It's just that Henry's trolley smelled of garlic.

So, the terrines. The first a firm concoction of pork and lardons with 2006 Fleurie and wrapped in bacon, the second a pig's liver parfait made with Moscatel. What contrast between the two, the one the sort of thing an upmarket poacher would keep in his bag (the one the ferrets aren't in) for sustenance on long, cold evenings, the other a smooth, slightly sloppy indulgence. Both were brilliant.

A quick bottle of champagne and we were into the casserole. Henry's muttered aside, "I always leave out the flour when cooking a casserole and allow it to reduce naturally" had had the effect of rendering the dish a little more liquid than I'd hoped, but it was a decently toothsome accompaniment to the reds that started to tumble before the worm of our corkscrew.
2000 Château Bellisle-Mondotte: a delightful St Emilion that had been much touted by Robert Parker on the release of the vintage. Soft and plush and plummy. It was an excellent start.

1999 St Aubin 1er Cru Derrière Chez Eduard from Hubert Lamy. Alas, my case had ended in a corked bottle but a week or so before. It was good to be able to visit it again. What value there is to be found in Burgundy if only one does a bit of hunting. Lamy's a master in the St Aubin appellation and this quaintly named 1er Cru (the name of which traslates as "behind Edward's house") is deliciously red and black fruited, supple, complete.

1999 Pommard 1er Cru Les Rugiens-Bas, Aleth Le Royer-Girardin. I was concerned that this one might be a bit on the young side but, worries unfounded, it was so lush, so voluptuous. Wonderful.

1995 Château Calon-Ségur: a stern counterpoint. Upright; barely ready. Claret of the old school, demanding hearty fare which, luckily, we had to hand. I loved it. One or two others thought it a bit prepubescent.

2001 Montepergoli from Enrico Santini. Another wine from a Bowes Wine offering and mostly Syrah. Black, black, black. Touch of Syrah rubber and pepper, yet Italian without doubt. This gained some devoted friends.

2003 Bastor-Lamontagne: a "cheapie" Sauternes. But what sheer unadulterated naughtiness. I would be surprised if there were a god on Olympus who'd turn his or her nose up at this. Fully sweet. Loaded with botrytis. Just lovely.

The next day rose or, rather, swam into view. There were thick heads and creased brows at breakfast, but bacon and eggs started the recovery and standing around in the cool waters of the River Tweed carried it forwards. After a morning of fishing we actually started to feel slightly peckish.

A Riesling was broached. 2001 Auslese Trocken by Kunstler. Rather bizarrely sealed with a plastic cork, it was nevertheless pure, complex and acted as a cold shower to our rather muggy craniums.

Monkfish in bacon was acurately barbecued. The monkfish welcomed the Kunstler with open fins. A good match. Veal kidney was barbecued. It was about as gamy as one would wish for a piece of offal. 2002 Château d'Aiguilhe by-passed it, as did the 2000 Château La Tour St Bonnet. Both were lovely, the former oaky, medium weight, ready, an unashamed pleasure-giver, the latter the most serious vintage I've tasted from this dependable property.

More fishing. A very large trout, perhaps a sea trout, that had been rising steadily to a hatch of flies took my offering with insane gusto and smashed my line without thinking about it. Lesson learnt. Just because a rise looks like it's made by a small-mouthed tiddler doesn't mean there isn't a zoo creature beneath it.

Back to Luke's. Tarantara! The JB Soc Gala dinner! We were welcomed back with a glass of 2004 Kumeu River Chardonnay from NZ, a dead ringer for a good Savigny-lès-Beaune or better: lovely stuff and a great cleanser. 2001 Pavillon Blanc de Margaux followed. I have drunk insufficient bottles of this wine in its maturity. Wow, this is delicious stuff, now becoming rather expensive. Almost no hint of its 100% Sauvignon Blanc on the nose, just creamy tangerine and lemon fruit. Lovely weighht on the palate, with real fresh crunch at the end. Fabulous. We were ready. Henry, bring it on!

Organic chicken livers in peppercorn jelly vied for attention between a pair of 1962 clarets: Giscours and Lynch-Bages. What an overlooked vintage this was, as are all that are unwise enough to immediately follow such luminary harvests. For that reason, they're relatively cheap (if you can find them) and they always had sufficient acidity for well kept examples to be still up and running.

Giscours: complex, elegant, lovely. Full tasting note can be found at the website by clicking Library and Archive, then Tasting Notes and entering Giscours.

Slow-roasted breasts of Borders woodpigeon. The dish of this particular Convivium? Most of us thought so. I love pigeon anyway and Henry treated these birds with great kindness.

The evening ended with a coffee granita each and 1970 Dow. A 2003 white Crozes-Hermitage licked us all into shape for bedtime.

I was off to another beat of the river the next day and, alas, like all Scottish rivers at the moment, it was almost devoid of salmon. In the morning, I fished the beautiful stretch in the photograph above as squadrons of swans flew low past me, their wings whistling asthmatically as they passed.

I popped back at lunchtime to witness - and partake in - leek flan and the barbecuing of Dumfries venison. A 2005 Riesling from Ernie Loosen washed our panting tongues with bright fruit before a 2004 Vouvray Clos de Borg Sec of Huet settled more seriously on our senses. Good stuff this, not yet acquired the wet wool of old Chenin.

I fished back at Rutherford in the afternoon and, at last, in late afternoon, a salmon came to my fly. I felt two strong pulls on my line and then...nothing. Reeling in, I found my fly had been swimming backwards, its hooks caught round my line and with no chance of hooking even the most suicidal salmonid. My chance had gone.

Packing the fishing gear into the car for the last time, we headed back to Luke's for our last supper. There were chilled glasses of 2002 Chablis 1er Cru Les Forets from Moreau-Naudet to greet us, then more 2001 Pavillon Blanc.

Sea bass ceviche. God, I love ceviche. Henry tells me that it came from Peru originally, but who cares of its origins. Fish "cooked" in citrus juices, never having seen a degree of heat from an oven and fresh as a splash of sea water from an ice breaker's bow-wave. There's never enough!

Roast Galloway beef fillet, capered bone marrow, new pots. It's curious to note that none of us ever felt over full. Perhaps that's simply because we're becoming increasingly experienced gourmands!

More 1999 St Aubin 1er Cru, more 1999 Pommard Rugiens. A blind taster: 1994 Château Musar and what a beautiful vintage for this oddball from the Lebanon. Find it if you can.

Then a horizontal clarets, both 1996s: Léoville-Poyferré and Pontet-Canet, both superb. I was beyond taking notes, so just take my word for it. 1991 Warre. Rhubarb tart and cream. Sigh, but in a very pleasant and happy way.

I look forward to these annual events so much and we enjoy them to the full. We have yet to catch our first salmon, but perhaps next year we'll schedule it for a little later on when the silver tourists are more common.

Thank you to one and all. And thank you Bacchus. You're a very naughty boy.
Copyright © 2022 Bowes Wine Ltd  |  All Rights Reserved